Teaching is one of PSE’s flagship missions. Pre-existing curricula has been consolidated and internationalised, in the forms of two generalist Masters - APE and ETE – and a PhD programme. PSE has also developed and supported new courses to fill specific needs and to generate new audiences: a thematic Masters was introduced at the beginning of the 2008 academic year (PPD-Public Policy and Development); the Paris Lycées Exploration Annuelle en Sciences Economiques (PLEASE) initiative began in 2011; a training programme for secondary and tertiary economics teachers (Programme de Formations des Enseignants d’Economie du Secondaire et du Supérieur, ProF-En-EcoS) was established in 2012; and a Summer School began in 2016.

Development and internationalisation of the Masters

In the beginning, the course offerings were based on two generalist Masters created respectively in 1987 and 1985: the APE - Analysis and Policy in Economics Master and the ETE – Theory and Empirical Methods in Economics Master. PSE initially set out to enlarge the range of courses, then to internationalise and to promote more broadly the courses offered in English from 2007, in order to welcome more foreign students and teachers. In 2008, responding to an ever-increasing need for expertise in the evaluation of public programmes, the PPD – Public Policy and Development Master was created. At the start of the 2016 academic year, the APE and ETE were merged into one generalist programme, co-accredited by the EHESS, the ENS, the Ecole des Ponts Paristech and the University of Paris 1 Panthéon-Sorbonne.

The recruitment of a dedicated pedagogical secretariat, the development of digital resources, the modernisation of the enrolment process and a more sustained follow-up of Masters students greatly increased the attractiveness of these training programmes and improved the working environment of professors as well as students. In 10 years, around 7,760 students – of whom 42 per cent are foreigners – have applied to these programmes and since 2010, around 800 students have been awarded their Masters. 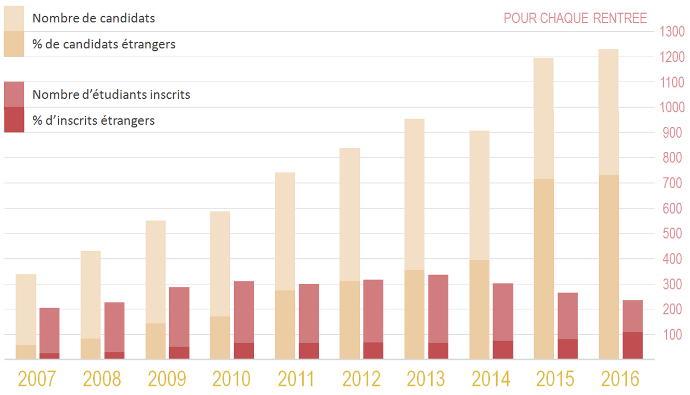 The paths taken by the students at the end of M2 illustrates the richness of these programmes: on average, two thirds continue their studies, mostly in doctoral programmes either in France or abroad (at LSE, MIT, Princeton, UCLA, Yale…); those who enter the labour market, 40 per cent of whom go abroad, gain their first post quickly (at AXA, Banque de France, Deloitte, Insee, Orange, Trésor…).

“I discovered and learned to love economics research thanks to PSE [...] which offers an exceptional learning environment of high quality – I then left to do a PhD thesis in the United States, where I could see the extent to which I had been well trained in the APE Master” - Julia Cagé (APE 2008)

Organised under the rubric of the Doctoral School of Economics, the PSE-accredited PhD programme is a continuation of the doctoral training offered by its constituent institutions. Since 2006, almost 340 students, of whom 42 per cent are foreigners, have written their theses, supervised by PSE researchers, while participating in the scientific life of the campus.Gradually, various policies have improved the support offered to PhD candidates

The young doctors meet with quick success in the labour market equally in France and abroad, ending up, among other places, with the World Bank, the European Commission, Centrale Paris, Dauphine, Development Bank of Latin America, Harvard University, MIT, OCDE, Oxford University, Sciences Po, the University of Singapore, the ULB…

“PSE gave me all what a PhD student wants: solid coursework, world-renowned advisor, generous funding to do what I should do, wonderful research environment, and life-long friendships...” - Jamal Ibrahim Haidar (PhD 2015)

In 2012, in the framework of Labex OSE, the Initiative ProF-En-EcoS was launched. Destined for secondary and tertiary school economics teachers, it aims to strengthen the links between the latter and economists-researchers and to promote economics and financial education. Each year, several regular events make up the programme bringing together from 30 to 90 participants (including the annual APSES workshop, the academic training plan, annual APHEC day).

Since 2012, at the initiative of CES, the annual programme called PLEASE (Paris Lycées Exploration Annuelle en Sciences Economiques) brings together around one hundred Paris region senior high school pupils for three days. Researchers expose them in a playful but rigorous manner to the economics approach to some big questions. High school pupils also participate in experiments organised by LEEP. In 2016, 12 sessions brought together pupils from 11 schools in the Paris, Versailles and Créteil school areas.

In 2016, PSE inaugurated its summer school around four themes - development, macroeconomics, microeconomics and industrial organisation – conducted by recognised experts in their disciplines. This first Summer School was a great success. It included more than 100 participants from around the world (42 nationalities were represented) with highly diverse profiles: analysts, economists, private and public sector consultants, PhD students, teacher-researchers, managers cadres… In 2017, 10 programmes will be offered between 19 June and 7 July.

Each year, PSE students and Alumni are awarded national and international Prizes. The following is just a recent selection :

“I look back fondly on the time I spent at the Paris School of Economics, first as a Master student then as a PhD student. I enjoyed the exciting intellectual environment and the collegial atmosphere among students. Now in Toulouse, I follow from a distance but with great interest the evolution of PSE. Happy birthday!” - Alexandre de Cornière (APE 2008, PhD 2012)