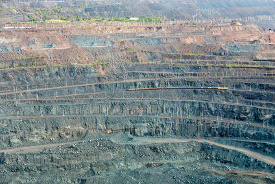 Civil conflicts often affect countries with quite complex institutions, and that have several layers of government, all of which have specific responsibilities in the field of security. Nevertheless, the economics literature on the conflict tends to treat these political institutions as abstract.

In this article, Vanden Eynde studies the conflict dynamic in the context of a decentralised state: the Maoist rebellion in India. The main question is whether tax regimes can lead to local authorities engaging in more security operations. The “Maoist Belt” in the east of India – where a bloody conflict has been underway since the 1970s – contains most of the country’s deposits of the most precious minerals. Indian mining royalties benefit the states, yet are still fixed by the national government. In addition, the states are responsible for security operations on their territory. It follows that mining royalties regimes can offer incentives to implement more police operations in these zones. The author analyses the impact of the introduction of an ad valorem tax (1) of ten per cent on iron ore production. The tax revenues from this new royalties regime reach up to one per cent of GDP of the states concerned. Indeed, observation between 2007 and 2011 of the districts with iron ore deposits shows that the increase in royalties was followed by an significant intensification in the use of force by police. There was no similar impact for deposits of other minerals, which were not subject to the hike in royalties. In addition, we cannot explain this intensification in the iron ore districts by their socio-economic characteristics, nor by fluctuations in the price of primary products, nor the consequences of a single budgetary shock on the level of state finances (because the differentiated intensification of police violence remains clear when we compare different districts within the same state). However, the intensification of violence in the regions that report the highest tax incomes confirms the rationality of decisions taken by the states that carry out police operations in the most profitable regions. This interpretation is corroborated by the fact that intensification is most pronounced in the districts where private firms play an important role in in the mining sector, because the state’s interest in controlling mines in the public sector does not change that much following a shock to royalties regimes. Thus, this article gives us a better understanding of the link between, on the one hand, local governments’ tax interest in controlling certain regions, and on the other hand, the local violence dynamic.

(1) Ad valorem: a proportion of the value (and therefore, not an amount fixed by physical unity)