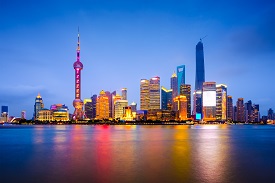 The spectacular growth in Chinese trade in the second half of the 20th century is the constant subject of Western media articles, which highlight the obvious explanations for it: the country’s transition to a market economy, followed by political changes in 1992, its dominant role as a production centre for other countries, its commitment to the WTO in 2001, etc. However, a very particular explanation for the rise in Chinese trade is also offered, namely, that China maintains privileged trade relations with certain countries, in particular with former Western colonies. Chinese firms have made multiple investments in trade-linked infrastructure in various countries, especially in Africa. Can we infer from this that China has taken up the positions held by former colonial powers by forging tight and informal trade links with these countries? To take the examples of Algeria and Ghana, China’s share of their imports has greatly increased in recent decades, from negligible volumes in 1950 to 9.5% and 20.4% respectively in 2011. It is worth identifying the reasons for such a significant increase.

The researchers offer three explanations, the most immediate of which is related to “bilateral” factors, that is, the development of elements common to these pairs of countries and not others, such as China’s political influence in these countries, or trade agreements between them. Second, in order to export great volumes, a country must be economically significant: the United States, India and China are among the top export nations in the world simply because of their economic size. Hence, the increase in imports from China by former colonies is partly the result of the unprecedented growth in China’s export capacity since the end of World War II. Third, independence entailed a redistribution of export flows from the former colonies towards all countries, following the deterioration in relations between them and the former hegemons.

Didier and Koenig explore and quantify these factors at the origin of the change in China’s share in the trade of countries that gained their independence after 1939. In the period 1990 to 2010, trade flows between China and the former colonies increased almost three-fold. They show that the main reason for this rise is the increase in GDPs, especially China’s GDP. Redistributions of trade have played only a secondary role. It is possible to calculate the hypothetical trade that we would have seen each year if independence had not created that redistribution of flows: in 2010, the former colonies’ trade with China was 15% higher than the level it would have reached had these countries remained colonies of their respective empires. Finally, the bilateral explanations, beyond trade agreements and customs duties, play a minor role: variations in informal bilateral preferences, such as political influence, explain only 5% of the growth in trade between China and the former colonies over that period.

Original title of the article: « Has China replaced colonial Trade? »