Short link to this article: http://bit.ly/2i2oYNc 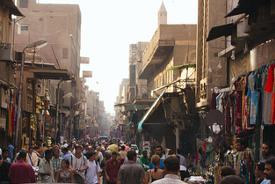 Women empowerment has been central in the policy and academic debates in recent years. There is now a large consensus that empowering women - along with the social and egalitarian issues - may benefit economic development and is highly desirable for efficiency. However, still, in many countries in the world, women lag behind men for several education and labor market outcomes. This is particularly true in the Arab world, where several countries are also experiencing in recent years a wave of protests, known as the “Arab Spring”.

In this paper, Nelly El-Mallakh, Mathilde Maurel and Biagio Speciale focus on Egypt, a country with a large segregation by gender and provide an empirical analysis of how the 2011 Egyptian protests are shaping the gender gap in labor market outcomes. One of the main novelties of this paper is the use of a unique dataset: the Statistical Database of the Egyptian Revolution, administered by the Egyptian Center for Economic and Social Rights. The authors exploit the geographical variation in districts’ exposure to protests’ intensity by geocoding each “martyr” – demonstrators who died during the protests – based on the site of death. Combined with nationally representative labor market surveys from before and after the political uprisings, the Egypt Labor Market Panel Survey (ELMPS), the authors find that the Egyptian protests have reduced the gender gap in labor force participation, by increasing women’s employment and unemployment, as women are found to actively start searching for employment. The authors also find that the increase in employment is mostly in “low quality jobs”, mainly in the informal sector. Conditional on being employed, their estimates show that the working spouses have also increased their labor supply and number of hours of work per week, relative to their husband. These findings are compatible with a framework of intra-household risk sharing. The estimates show that the recent waves of protests have negatively affected men’s remuneration, both the level and the volatility of their income flows, as a large share of men is employed in the private sector, which has been the most affected sector in the aftermath of the Egyptian protests. Hence, married women increased their labor force participation in order to face the increased risk and instability of their husband’s income flows. These findings add to the literature on the added-worker effect and to related works showing how a relevant temporary shock to the labor division between women and men can have long run consequences on the role of women in society.