Short link to this article: http://bit.ly/2hJZNCS 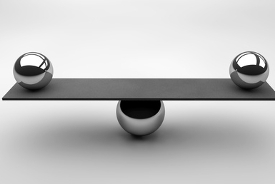 A Nash equilibrium is commonly described as a situation in which each person chooses an optimal strategy “given the strategies of others”. For example, if all the drivers on a French road begin to drive on the left, that would constitute a Nash equilibrium: no driver, knowing that the others drive on the left, would have an interest in driving on the right. A Nash equilibrium does not necessarily represent a generally optimal situation (in the preceding example, driving on the right is an equilibrium that seems better than to drive on the left, since it is not criminal), but it is an individually optimal situation - if we fix the strategies of the others. However, two major problems arise with this idea. First, it requires that the strategies of each agent be commonly known: that is to say, each supposes that the others play this strategy, but also that the other agents know that the others anticipate it and so on. (1). Thus, on the road, my attitude could change if I fear that any driver might deviate, in which case, it could seem rational not to drive. Second, there can be several Nash equilibria, and it seems legitimate to ask how the agents’ behaviours are going to co-ordinate around the “right” equilibrium (for example, French driving rules are an institutional means of encouraging drivers to choose the equilibrium drive on the right).

In this theoretical paper, Philippe Bich presents a new notion of equilibrium called “prudent equilibrium”, which offers a partial response to these two questions. This concept means we can adopt the most realistic hypothesis - that we cannot always expect rational behaviour from other individuals. A parameter of prudence for each agent is introduced, which can vary from total defiance (corresponding to infinite prudence) to total confidence (no prudence) in the rationality of the other actors. This approach also represents a refinement of the Nash equilibrium. In a number of classic economics models (2), several equilibria are possible, which renders the predictive capacity of the model more fragile (which equilibrium to choose?). Bich shows, through several examples, that among these equilibria, only one is prudent, in the sense described above. The prudent equilibrium offers a prediction of the behaviour of individuals. For example, if we consider two buyers who bid under seal for a Monet at a first-price auction (where the painting goes to the bidder who makes the highest offer). The buyers evaluate the painting at different prices, and each is supposed to have an idea of the bid of his competitor. The prudent equilibrium idea thus offers the “intuitive” prediction of a final bid close to the minimal value, while the Nash equilibrium fails to offer a prediction.

(1) Leading to a rationalisable equilibrium (2) Auction models, of Bertrand- or Cournot-type competition, or Hotellilng-type models of localisation.