Home > Economics for everybody > Archives > 5 papers...in 5 minutes ! > January 2019 > What can education policy do about social inequality?

Short link to the article : https://bit.ly/2SzLeQv 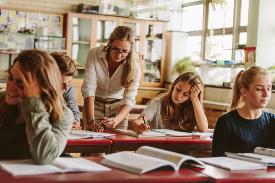 The “Equality of educational opportunity” report, also known as the Coleman Report (1966) is often interpreted as a demonstration of the relative impotence of schools policy: social and familial milieus have greater influence on students’ trajectories than the distribution of public resources. The limited effects in the Education Priority Zones (EPZ) revealed by research seemed to say the same thing. Nevertheless, there are two reasons not to close the case too quickly. The first is that it is not easy to assess the impact of extra resources on disadvantaged students: where would they have been without them? Thus, many non-experimental studies before the 2000s led to a strong under-estimation of the effects of a reduction in class size. By controlled experiment, taking advantage of the role of arbitrary thresholds in the opening and closing of classes, the research has made significant progress, and there can no longer be any doubt that reducing class sizes improves learning on average, especially among disadvantaged pupils. The second difficulty is that many policy measures in fact simply concentrate limited resources on disadvantaged pupils – this was the case for a long time in the EPZs until the policy of reducing primary school class sizes. The lack of an apparent impact can thus come from the fact that a new resource minimum is required to change the situation. Here again, recent research in economics shows that, against existing assessments, consequent changes to local expenses per student could have great effects not only on the school records of the most disadvantaged students but also on their rates of employment and adult poverty levels (Jackson, Johnson and Persico, 2014).

The “boarding schools of excellence” policy, evaluated by Luc Behaghel, Clément de Chaisemartin and Marc Gurgand, can be regarded as an intensive and proactive form of priority education. These boarding schools aim to promote and support the most motivated students, whose social or family environment is not conducive to the development of their potential. This boarding school system should henceforth allow them to study in good conditions and benefit from appropriate supervision throughout the day. The authors study the effects of the first boarding school of excellent, Sourdun, on two cohorts of pupils, admitted in 2009 and 2010. Their assessment is based on the fact that in the face of a surfeit of eligible candidates, a random draw led to the constitution of two groups between whom comparison is valid: the “test” pupils, admitted to Sourdun, and the “control” pupils who are statistically comparable but were not admitted. The study documents how, with a per-student budget virtually double the normal budget (due chiefly to the costs associated with boarding), the Sourdun students benefitted from not only greater resources (classes of 19 pupils rather than an average of 24, for example), but also a supervision structure (discipline, teacher availability, study hours) that was in principal advantageous. A preliminary review suggested strong positive effects on the students. These effects were apparent, however, only two years after admission and remained concentrated on the pupils whose academic achievements were the highest when they entered Sourdun. A second enquiry has recently been done using administrative data. It shows a very strong impact on academic results – in particular, the probability of obtaining a high-school certificate (baccalauréat général) rose by 45%, and obtaining one with special mention increased by 64%, and these effects are valid for all pupils admitted to Sourdun, not only the best among them. The research is on-going, into the future of these students in tertiary education, then in the labour market. The first results show already that it is possible, with a targeted programme, to transform radically the academic achievements of students from modest backgrounds, thus tearing a hole in the notion that school policies are impotent in the face of inequality. Nevertheless, such a policy is a choice: to concentrate significant resources on motivated students of median academic level. The assessment of the boarding school policy at Sourdun thus does not prove that what succeeds with them would achieve the same success with students who have an inferior academic record or are less motivated. But it raises the question of what actions should be taken on behalf of the latter, in a context in which extra resources allocated to priority education are limited.

Original title of the article :