Parents’ education and child body weight in France: The trajectory of the gradient in the early years 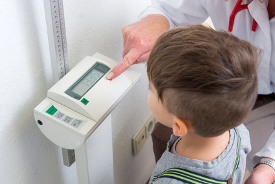 In 2010, around 15 per cent of children in France were overweight or obese. Given that being overweight reduces quality of life in the short-term and can have serious consequences for adult health (including diabetes and cardiovascular disease), it seems important to identify the causes well. Recent work has brought to light the “protective” role of the socio-economic status (SES) of parents (their education and income levels) against child obesity. Since body mass develops progressively through infancy, we might expect that the protective effect of SES is reinforced as children grow up; living conditions would also have a cumulative effect on the health of young people. On the other hand, if, from a certain age, children are less and less influenced by their family and more by their peers, then the SES effect on their weight will decrease over time. In this article, Apouey and Geoffard look at the effect of parents’ education level on children’s body mass, paying attention to its evolution as the children grow up. Their work is based on two data bases that cover around 40,000 children from 0 to 17 years, between 1999 and 2010 (1). In these enquiries, it is the families who report the height and weight of the children. That is, height and weight are not actually measured, and are hence subject to reporting bias. The analyses reveal significant social disparities in health: on average, a child aged between two and seven years whose mother finished high school or further has a risk of being overweight that is -7.2 percentage points lower than that of a child whose mother has a lower education level. This average hides a quite singular change: the inequalities are reinforced until the age of eight, and decrease from then on. So, two year-old child whose mother has a post-high school qualification will have a lower probability (by -5.3 points) of being overweight than a child whose mother has a lesser qualification. This gap reaches -9.6 points at the age of eight, then goes down to -1.25 points at 17 years. The authors observe the same trend in inequalities when they use other SES measures (including family income and father’s education). This change can be interpreted in two ways: on the one hand, it could reflect a real decrease in social inequalities in health from the age of eight onwards. This would be the case if, for example, from that age, children and adolescents are less and less influenced by their families in favour of their friends and peers, or if physical education classes promoted at school erase some of the family influence. On the other hand, this trend in social inequalities might not reflect any real decrease in health inequalities, but simply be the result of a change in bias in reporting of weight and height for children older than eight (this bias is then automatically linked to both age and SES). Some complementary research that uses not only reported anthropometric data but also measured data, and compares associated trends in inequalities, would allow us to choose between these two interpretations.