Short link to this article: http://bit.ly/2rgum4N 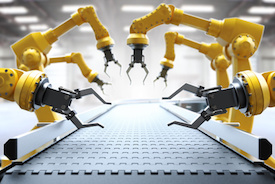 According to a study conducted by Daron Acemoglu (MIT) and Pascual Restrepo (Boston Uni.) (1), putting a robot in a certain “post” in an industry leads to the destruction of 6.2 positions in the surrounding geographical area. But what does economics have to say about this subject? Do robots inevitably lead to the disappearance of work? Generally speaking, economic science teaches us that technological progress advantages some categories of workers and harms others. It is usually assumed that technological progress damages less skilled workers, by replacing, for example, ticket-punchers in the Metro with turnstiles, cashiers with scanners and concierges with security door-codes. We should not therefore, minimise its role in increasing inequalities among workers. However, innovation can also advantage unskilled workers and hurt some categories of skilled workers: this was the case, for example, for the assembly line invented by Henry Ford, which rendered obsolete artisanal knowledge in the automobile sector, while contributing to an increase in workers’ salaries. Since the mid-1970s, the global economy has been swept by a wave of technological innovation – automation, IT and communications, etc. – which has had uneven effects on different work sectors. In general, these innovations are seen as responsible for the rise in income inequalities in most Western countries over the last four decades. However, it is admitted that, over the long term, technological progress is responsible for the extraordinary increase in salaries and standards of living among consumers seen since the industrial revolution. But recent progress in robots could put that optimism in doubt and prove right those who predict the end of work.

In this article, Saint-Paul considers six scenarios in order to shed light on this question. In three of them, a quasi-idle class of human beings is maintained thanks to transfers collected on production carried out by robots. These transfers can be made through the welfare state, the clientelism of an oligarchy that owns the robots, or the neo-Fordist maintenance of tertiary employment whose essential function would be the paying of a salary that would maintain purchasing power. The author then envisages three other scenarios without redistributive mechanisms. According to the rentier scenario, dynasties of workers save enough so that their descendants can live exclusively on their financial income – generated indirectly by the robots; and this class is sufficiently large to oppose politically the introduction of redistributive measures in favour of workers. According to the Malthusian scenario, salaries fall to the subsistence level and the human population diminishes, allowing only a rentier robot-owning class to survive. According to the virtual scenario, the subsistence wage itself drops considerably as an effect of the new technologies: the population maintains itself despite the cuts in wages. These scenarios allow the author to propose that the emergence of flexible and intelligent robots could represent a real threat to work, because it facilitates the mass production of cheap substitutes for all forms of human work. In these conditions, redeploying the human resources liberated by automation towards new activity is no longer possible, because the new tasks, too, can be carried out by robots. Thus, robotisation would complete the transition to a society in which the expression “earn a living” will no longer make any sense. Human consumption will be financed by the income of the robots that they own, redistributive transfers, and will be free because it is largely virtualised.