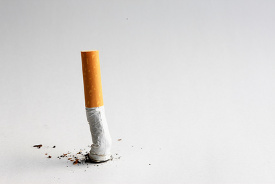 In 2014, smoking was the first cause of “avoidable” mortality in France, responsible for 90% of lung cancers and 73,000 premature deaths every year (1). Anti-smoking campaigns, along with successive increases in the price of a packet of cigarettes, reduced general consumption, but certain population groups had difficulty reducing their consumption to any significant extent (2). In other words, information about the risks, taxation and medical monitoring are not always enough to induce people to stop smoking or even to reduce their consumption. This being so, it is important to understand better how individuals react to and interpret the information that they are given.

In this article, Marsaudon and Rochaix study the impact of a “health shock” - an acute problem that requires a course of medical treatment - on the weekly consumption of tobacco, using the Gazel cohort, which monitors health changes among 20,000 participants from the EDF-GDF (electricity and gas corporation) over a long period (3). The hypothesis is that health shocks act like a new source of information, leading individuals to modify their perception of risks to their own health. The authors compare individuals who have experienced a health shock with a control group of those who have not experienced a health shock but who present – one year before the shock – the same observable characteristics. Thus, the revelation of a possible difference between these two groups in the average number of cigarettes consumed could reasonably be attributed to the health shock. Those who had experienced a shock and the control group were exposed in the same ways to an anti-smoking campaign and to relative cigarette prices. Since these two factors influence the demand for tobacco, it is important to take them both into account. The results show a significant and sustainable decrease in cigarette consumption. One year after the health shock, smokers had reduced their weekly consumption by one cigarette and this reduction grew over time. Over the whole period, i.e., eight years after the shock, those who had experienced the shock smoked on average two fewer cigarettes per week than the control group for each year. Thus, over the period studied, those in the group being treated had, on average, reduced their consumption by 16 cigarettes. Furthermore, this decrease was different depending on how heavily someone smoked; the heaviest smokers (of at least 20 cigarettes per day) reduced their consumption more. They smoked on average three cigarettes fewer per week, in each year of the period studied.

The study thus documents the temporal instability of individual preferences, the health shock having led them to adopt permanently less risky behaviour. Personalised prevention information seems to have greater impact on individual behaviour to the extent that she is directly affected. Future social science laboratory experiments could be conducted, mimicking a health shock, using augmented reality or virtual reality techniques. (4). This would allow more detailed observation of tobacco-consuming behaviours and estimation of the efficacy of new anti-smoking campaigns based on active and personalised awareness of the individuals concerned.

(1) INPES website, “Tabac”: http://inpes.santepubliquefrance.fr/10000/themes/tabac/index.asp(2) OFDT, INPES – Levels of drug use in in France in 2014 (mars 2015) : https://www.ofdt.fr/BDD/publications/docs/eftxfbv3.pdf(3) See the GAZEL site, Inserm: http://www.gazel.inserm.fr/fr/(4) Already used to stimulate the phenomena of ageing