Short link to this article: http://bit.ly/2d5Vcaw 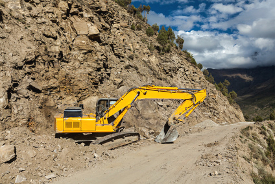 The Indian government spends a large share of its budget on rural infrastructure development. Whether it be road construction, electrification, or the provision of drinking water, such programmes create new opportunities for economic growth and clearly enhance citizen wellbeing. But, these programs also create opportunities for contractors and officials to engage in corruption. It is hard to measure and analyse such corruption, even if effective public good provision requires policy makers to maximize the benefits of programmes while minimizing losses due to corruption. In India, PMGSY (1) is the largest rural roads construction programme. Its scale is enormous by any standard. As of June 2016, more than 460,000 km of roads had been completed under PMGSY. While the programme is funded by the central government, its implementation relies entirely on private contractors. Interestingly, the tendering process for these contractors was explicitly designed to forestall corruption: it requires contractors to participate in a competitive, 2-stage sealed bid auction.

In this article, Jonathan Lehne, Jacob N. Shapiro and Oliver Vanden Eynde use a uniquely rich dataset of more than 88,000 roads constructed between 2001 and 2013 in India, and find that PMGSY’s strict tendering procedures did not prevent substantial political corruption. Their analysis focuses on state-level parliamentarians (MLAs), and examines whether they intervene in the assignment of contracts in their constituencies. Under the official PMGSY guidelines, these politicians have no role in the tendering process. The research design exploits the fact that Indian surnames can be an indicator of family ties, caste, and religious identity. For each MLA the authors measure the share of road contracts in their constituency won by contractors who share their surname. As a natural experiment, they compare MLAs who barely win an election with runners-up who barely lost (2). Using this strategy, they find a first piece of evidence of corruption. When an MLA is narrowly elected, the share of contracts awarded to contractors who share their name rises from 4% to almost 7%. These distortions might appear small, but they are not negligible. Applying this estimate (+ 3 points) to their full sample of road contracts implies that MLAs intervened in the allocation of around 1,600 contracts, worth approximately 470 million USD. Given that their approach only captures preferential allocation to contractors with the same surname as the politician, the estimates can be seen as a lower bound on the true scale of preferential contract allocation. While the preferential allocation J. Lehne, J.N. Shapiro and O. Vanden Eynde identify clearly contravenes programme rules, this does not in itself mean that it adversely impacts road construction. In fact, connected contractors might offer work of higher quality. However, their results suggest that preferentially allocated roads are more expensive and more likely to fail internal quality inspections. In addition, PMGSY allows using a particularly powerful measure of performance: whether an officially completed road exists in practice. This can be ascertained by checking the information on road accessibility in the 2011 census for villages connected before 2011 according to PMGSY’s administrative records. As a measure of “missing roads”, the authors consider villages that do not have “all-weather road access”, PMGSY’s stated objective, according to the census. Preferential allocation of a road to a contractor with the MLAs surname is associated with a 170% increase in the likelihood of having no all-weather road when one should be present. In the full sample of contracts, these estimates imply that the preferential allocation of roads accounted for an additional 672 missing all-weather roads. These missing roads might otherwise have served roughly 1.16 million people.The case of PMGSY illustrates how difficult it is to prevent corruption in public infrastructure procurement, and how failure to do so can undermine the real economic opportunities a programme is set up to provide. PMGSY’s bidding process was designed to exclude formal involvement from local politicians. As the evidence suggests, this does not prevent MLAs from exerting significant influence. Actually, the lack of formal involvement may mean that voters do not hold MLAs accountable for what is seen as a central government programme (3). MLAs’ position with regard to PMGSY can therefore be seen as a perfect opportunity for rent-seeking. They retain some ability to push resources to favoured contractors, without being held responsible for the consequent drop in the quality of the roads that are constructed – if they are constructed at all.

(1) Pradhan Mantri Gram Sadak Yojana(2) The assumption is that winning or losing an election by a small margin is random, which allows the authors to interpret any difference between winners and losers as a causal effect of winning the election(3) They find no evidence that the preferential allocation of roads and its associated cost distortions follow electoral cycles