Short link to this article: http://bit.ly/2d2GFfQ 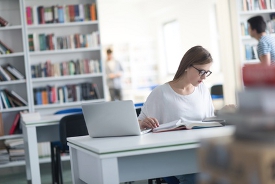 Women are greatly under-represented in scientific professions and in certain academic disciplines (mathematics, physics, philosophy). Discrimination, in schools and in hiring, has long been evoked as one of the possible causes of this phenomenon. Nevertheless, recent “testing” experiments, conducted with fictitious CVs differing only in the gender and name of the candidates, lead to contrasting results and do not confirm this hypothesis.

In this article, Thomas Breda and Mélina Hillion show that gender bias in recruitment can vary greatly, depending on the context under study. Two essential parameters explain the bias: the degree of under-representation of one gender or another in a given discipline, and the level (of studies) at which the evaluation takes place. The authors use as a “natural experiment” the three public competitions to recruit teachers in France, from primary school to higher education: the “Agrégation” (for higher level teaching) in 11 distinct disciplines, the CAPES (for mainly primary teaching) in 9 distinct disciplines, and the recruitment competition for school teacher positions (“professeurs”). Comparing the marks obtained for the period 2006-2013 by more than 100,000 candidates in non-anonymous oral exams and anonymous written tests in these competitions, they observe an assessment bias in favour of the minority gender, a bias that increases greatly with the degree of under-representation of the latter in the discipline. This bias slightly favours men in literature and languages, and broadly favours women in mathematics, physics and philosophy. In these latter disciplines, the proportion of women who do well enough to be admitted to the CAPES and the Agrégation increases from 10 to 20% between the written and oral exams. Several complementary tests confirm that these results reflect positive discrimination by the assessors rather than differences in competence among the candidates (1). In addition, the phenomenon is stronger in the Agrégation than in the CAPES, but non-existent in the competition to recruit teachers for the upper years of high school. These findings suggest that there is no “negative” discrimination at the point of hiring against women highly qualified in the disciplines where they are under-represented. On the other hand, we cannot exclude the existence of such discriminatory practices earlier along the educational path or during recruitment for less-qualified positions.

The findings contribute to public debate and can help us to choose the most appropriate ways to increase the presence of women in fields where they are currently under-represented. The study suggests, first of all, that policies aimed at limiting discrimination and challenging gender stereotypes should concentrate more on the preliminary steps in the process of academic orientation. It also shows that initiatives that render the recruitment process completely or partially anonymous (for example, the use of anonymous CVs) risk leading to the opposite effect to the one intended. Finally, the results suggest that young women and young men can take up study paths traditionally reserved for the other gender without fear of being discriminated against. Broadcasting this information could put an end to the widespread notion that women are systematically discriminated against in the sciences (around 60% of senior high school students believe this) and thus limit the problem of self-censorship that leads young women and men to reject non-traditional education streams.