Home > Economics for everybody > Archives > “A word from” > Agnès Bénassy-Quéré: “We can and we must break through the current deadlocks in (...)

Agnès Bénassy-Quéré: “We can and we must break through the current deadlocks in the euro area”

A group of 14 German and French economists (1), working in institutions and research centres in Germany, France, Belgium, the UK and the US, have published a report proposing six reforms that would put an end to the financial, economic and political fragilities of the euro zone. Agnès Bénassy-Quéré, co-author of the report entitled “Reconciling risk sharing with market discipline: A constructive approach to euro area reform”, presents its aims and broad outlines. 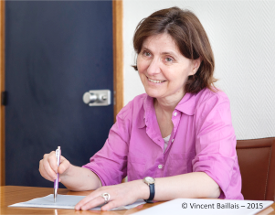 What is the main objective of this report?

With Europe’s economic recovery has come the risk of complacency from political decision makers to complete the reshuffling of the euro area architecture. We believe that the euro area is not out of the woods yet: the currency remains vulnerable because of persistent financial weaknesses and market segmentation, and deep divisions among member States on economic and political issues.

You begin by listing the euro zone’s weaknesses: what are they?

There are three main ones. First, the “doom loop” between bank and sovereign risks – banks support governments by purchasing sovereign bonds while expecting bail-out in case of difficulty – has not been broken. It remains a serious threat for some member States and for the euro area as a whole, while the fragmentation of the financial market prevents full exploitation of the advantages of a single currency. Second, existing fiscal rules are complex and opaque. They encourage governments to tighten the screws when things are going badly and to distribute tax windfalls when things are going well, without halting the trend towards increasing public debt. The defects of the euro area’s fiscal architecture have also resulted in too much pressure on the ECB and aggravated political tensions among member States during the crisis. Third, emergency assistance linked to tough adjustment programmes has been a very harsh experience in both debtor and creditor countries. They have contributed to the rise of populist and nationalist movements. Mutual trust has been lost.

The report suggests a “third way” intended to overcome the disagreement between Germany and France about what reforms should be made. Can you tell us more about that?

The official positions of Germany and France seem irreconcilable. To put it simply, Germany wants to toughen fiscal rules, reinforce market discipline through the strict application of the no bail-out rule and introduce a mechanism allowing automatic restructuring of sovereign debts; it rejects any additional risk-sharing scheme above and beyond the European Stability Mechanism. France, on the other hand, advocates more flexible fiscal rules, extreme caution in relation to sovereign debt restructuring, and the introduction of a macroeconomic stabilisation mechanism at the euro area level. Our French-German group believes that these two visions should be combined so we can develop a robust architecture. Thus, market discipline will not be credible while the banks remain vulnerable to debt restructuring by a member State, and mechanisms of risk sharing (such as a European deposit insurance scheme and a stabilisation budget) are not in place. More generally, a solid financial architecture requires instruments that both prevent crises (through good incentives at national level) and attenuate their effects (when, despite all precautions, a new crisis arises).

You and your co-authors make six concrete proposals: was it difficult to arrive at a consensus on them?

We arrived relatively easily at consensus on financial and institutional questions. The discussion took longer on fiscal questions. However, I was surprised at our capacity to find a consensus, given the team members’ very different horizons. We relied on several studies, done both by our members and not, particularly in the fields of debt restructuring, the introduction of a “safe asset” the properties of fiscal rules and mechanisms of risk sharing.

Will the application of your recommendations run into barriers? Economic, political, decision-making obstacles?

We have presented our conclusions to the principal advisors to public decision makers in France, Germany and the European Commission. We have also had discussions with Italian colleagues. There is a strong temptation of cherry-picking. However, as I said, the six proposals must be considered together. This is necessary politically – to get everyone to agree – but above all economically, to avoid, for example, triggering a new crisis by inciting banks to sell off their sovereign bonds, or symmetrically, to reinforce moral hazard by offering additional insurance to governments without changing their incentives to behave prudently.