Home > Economics for everybody > For a wider audience > 5 papers...in 5 minutes ! > December 2013 > Using or Hiding Private Information? An Experimental Study of Zero-Sum (...) 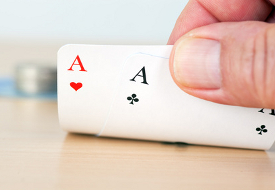 How does an individual choose whether to use the information that (s)he possesses when that information ceases to be “profitable” once it has been revealed? With the aid of theoretical and experimental tools, the authors studied how individuals choose to use information they have and how they resolve the following dilemma: to use the information, at the risk of revealing it to an adversary, or to behave as if they have no such information? The laboratory experiment put together dozens of volunteers put in three different scenarios, in linked games, in the manner of a card tournament, and different degrees of use and non-use of information were tested.Nicolas Jacquemet and Frédéric Koessler draw several conclusions from the experiment. The empirical results are generally compatible with the theoretical predictions, though with certain differences. Players’ performances corresponded to the theoretical performances, and the value of the information remained positive throughout the experiment; that is to say, holding on to private information is always beneficial to the player concerned. But the strategies differ slightly from optimal strategies in the most complex situations. In particular, individuals prove to be incapable of hiding information completely when it is optimal to do so, but that has little effect in the end because they adjust their behaviour when the losses linked to the revealing of information increase.......................Original title of the article: Using or Hiding Private Information? An Experimental Study of Zero-Sum Repeated Games with Incomplete InformationPublished in : Games and Economic Behavior, March 2013, Vol. 78, p 103-120.Download : http://halshs.archives-ouvertes.fr/halshs-00773412......................Picture: © Edler von Rabenstein - Fotolia.com