Home > Economics for everybody > For a wider audience > 5 papers...in 5 minutes ! > February 2014 > Improving College Access and Success for Low-Income Students: Evidence from (...) 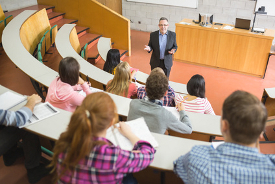 Among French student-aid policies, means-tested scholarships are the state’s principal way of giving direct aid to students. Each year, these benefit around 600,000 undergraduate and Masters students, that is, around one-third of the student population, to the total sum of about one and a half billion euros. These stipends, disbursed on condition of resources being available, take into account the income and expenses of the student and her family. Gabrielle Fack and Julian Grenet studied the effect of this assistance on access to university and success rates in higher education, using administrative data from student scholarship applications as well as the total of students enrolled at university between 2008 and 2010. In order to identify the causal impact of means-tested stipends on student choices, the authors use the fact that the scale for awarding scholarships is based on parental income tranches. These tranches create discontinuties in the amounts of aid awarded to students: it is thus possible to compare students whose parental incomes fall either just above or just below the scholarship scheme threshold. These students present very similar characteristics but do not receive similar stipends.The authors estimate that an annual stipend of 1,500 euros (along with free entry to university) increases the likelihood of enrolling or re-enrolling in university by two to five percentage points, compared with students whose education is free but who receive no further financial assistance. The awarding of a stipend also has positive effects on the decision to re-enrol in university a year later and on the probability of Masters students gaining their diploma within two years (this is increased by five percentage points). The results demonstrate that means-tested scholarships favour not only access to higher education but also the decision to take up post-graduate studies......................Original title of the article: Improving College Access and Success for Low-Income Students: Evidence from a Large Need-based Grant ProgramPublished in : PSE Working Paper, n°2013-33Download: http://halshs.archives-ouvertes.fr/halshs-00870546......................© WavebreakMediaMicro - Fotolia.com