To Have and Have Not: Migration, Remittances, Poverty and Inequality in Algeria 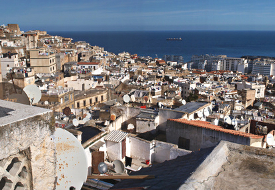 In developing countries, the decision to migrate is often taken for economic reasons. Once employed in the host country, migrants send back to their families, collectively, colossal sums of money: in 2012, according to the World Bank, more than 400 billion dollars were sent to Africa, Asia and Latin America, an amount much greater than development aid. But debate among experts about this money is heated: does it allow the families who stay behind in the country of origin to exit from poverty, and reduce local and global inequalities? David Margolis and his co-authors carried out a study of 1200 households in two regions of Algeria, Nedroma and Idjeur. The remittances are mostly informal – less than 10 per cent of the money flows are registered by the Algerian state – and the authors decided that it is fundamental to analyse directly the monetary structure of these households, particularly through the use of their counterfactual: “How much would the family have earned if the migrant had not left?” Different conclusions are presented. With more than 95 per cent of Algerian migrants choosing France, the links – and the anticipation they create – between the two countries play a key role. In the two regions examined in this article, the money flows reduce the inequalities and poverty of the families that stay in Algeria, but most markedly in Idjeur. There, the Gini coefficient is reduced by eight per cent, whereas in the Nedroma region, it is reduced by four per cent. The authors note that almost one-third of the transfers are made from pensions received in continental France, of which at least part is repatriated to Algeria. In both regions, there is a decrease in poverty: the remittances reduce by 35 per cent the number of people who live on less than $2 per day. The decrease in extreme poverty (less than $1.25 per day) is even greater: the number of households in this category in Idjeur is 4 times lower, and 2 times lower in Nedroma. Several factors explain the difference in impact of remittances in the two areas: historically, the emigration of Algerians from Nedroma slowed down after independence, which automatically reduced the sums coming in; this region is better integrated into the national economy and its local labour market is less than volatile than in Idjeur; the “double loss” phenomenon (where the emigrant does not work locally and does not send back enough money) is less present in Idjeur; and migrants of Kabyle communities feel greater social pressure and send back more remittance money than their Nedroma counterparts.......................Original title of the article: To Have and Have Not: Migration, Remittances, Poverty and Inequality in AlgeriaPublished in : IZA DP No. 7747, novembre 2013Download : http://econpapers.repec.org/paper/diawpaper/dt201402.htm......................© moonbo - Fotolia.com