Short link to this article : http://bit.ly/2pGpDuN 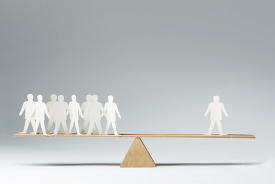 Collectively, human groups face numerous risks, including the macroeconomic risks of recession and financial crisis, climatic risk, risk of epidemics, and the risks associated with the performance and the effects of new technologies. In this context, two kinds of questions arise: first, what is the group’s attitude to risk when its members have a greater or lesser propensity to withstand hazards? Second, how should risk be shared among group members? Optimal risk sharing describes how the possible consequences of risk are shared among the individuals: what risk does each one carry and what is the final distribution of the consumption of available resources? Economists have sought to answer these questions with reference to a utilitarian collective decision-making rule: the different possible choices are ranked in relation to a weighted sum of the levels of well-being (or expected utility) of individuals. Theoretical work has shown that the rule of optimal sharing of risk consists in each individual bearing the risk, each facing a greater or lesser risk in her consumption depending on her tolerance of risk. However, according to the individual weightings used in the utilitarian rule, the optimal sharing of risk can mean allocating some people a standard of living below the poverty line, even when global resources are sufficient to give every member of the group a standard of living above it. On the other hand, there is no general rule on the aggregation of individual attitudes to risk: adding an individual more or less tolerant of hazards can increase or reduce a group’s collective aversion to risk.

In this theoretical article, Fleurbaey and Zuber offer a version of the utilitarian rule that they call “equitable utilitarianism”. This rule guarantees that an optimal sharing of risk means that all members of a group will enjoy a standard of living above the poverty line when the average level of resources is higher than it. In addition, those who are more disposed to taking risks (the most “tolerant” of risk) have a higher consumption rate when the aggregate resource level allows it, but a less high rate when it does not. The individuals thus share the risk equitably: those least tolerant of fluctuations can be assured that they will not fall into great poverty, while those who better support risk offset the risk of poverty by a higher standard of living in the most favourable situations at a global level. Equitable utilitarianism also guarantees that a population of individuals most tolerant of risk is always better off in the face of hazards distributed in egalitarian fashion because they suffer less from those hazards. Finally, the authors show that increasing an individual’s tolerance of risk always increases the tolerance of a group close to the poverty line.………………..Original title: Fair UtilitarianismPublished in: Working paper CES 2017.05 - Janvier 2017 Available at: https://halshs.archives-ouvertes.fr/halshs-01441070v1© pogonici - Fotolia.com