Short link to this article: http://bit.ly/2knanRt 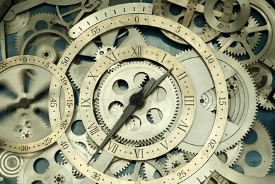 “One today is worth two tomorrow" . This sentence summarizes very well the idea behind the work of Paul Samuelson, who first formalized the concept of impatience for an economic agent in his influential 1937 contribution. In economics, in fact, it is standard to assume that agents prefer immediate utility over delayed utility: it means that they are delay averse. Impatience is achieved by putting decreasing weights to future time periods, or, in other words, putting a discount factor on the future. Consider the problem of a social planner who needs to allocate wealth to future generations. It turns out that, if he discounts the future, then he is myopic (1). This means that he will neglect an increase of income given to all generations whenever the increase starts too far in the future. To take a concrete example, consider a politician who does not undertake a policy that would make better off our grand-children, grand-grand-children, grand-grand... only because our generation and the one of our children are not affected. Clearly, such a behavior may be hard to accept.

In this theoretical article, Lorenzo Bastianello and Alain Chateauneuf depart from the discounting model and analyze two behavioral definitions of impatience in several decision-theoretic models (which are generalizations of Samuelson’s discounted utility model). The first definition says that an agent is long-term delay averse if he always prefers a small extra amount of income to a larger one if the larger one is paid in a very distant future. The second definition says that an agent is short-term delay averse if he always prefers an extra amount of income today rather than tomorrow. The decision-theoretic models used in the analysis prove to be flexible tools in order to generalize the notion of weights that an agent (or a social planner) puts in different time periods. For instance, these models allow describing non-myopic behaviors. More importantly they allow studying the two versions of delay-aversion defined above. The first definition sheds light on the following impossibility result: strong monotonicity of preferences and equality among generations are incompatible. In fact, strong monotonicity and long-term delay aversion are closely related. Therefore, since the latter concept represents a form of impatience (even if very weak), a generation which is too far in the future will not be considered as important as a generation which is close to the present. The second definition turns out to be the behavioral counterpart of the notion of impatience given by Irving Fisher in the 1930s. An agent is impatient à la Fisher if and only if he has a marginal rate of intertemporal substitution always greater than one. The authors show that this condition is equivalent to short-term delay aversion.