Short link to this article: http://bit.ly/2lM8dbf 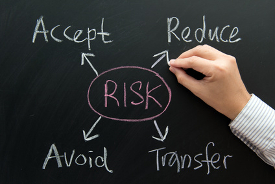 To live is to take risks: Danger is all around us and the most we can do is to slightly reduce our exposure. Certain actions such as buckling your seat belt when driving or drinking only bottled water do in fact reduce the risk of incurring mortal injuries or contracting painful diseases; however, even such simple measures are not costless. Is a morning coffee worth the risk of hot water burns or the risk of spills on the laptop?(1). Every moment of every day, we are making decisions that trade risks against some benefit we incur by accepting them.

Take biking the streets of Paris: it is an exciting and daring experience. Buying a helmet (strongly advised!) reduces exposure of incurring a bad, or even mortal, injury to a certain extent. What is interesting is that by purchasing a helmet, a clear monetary trade-off appears. Some extra euros are paid to reduce exposure to what is perceived as mortality or health risk. Yet, it is extremely hard to get accurate data on these monetary-risk trade-offs for an economist to disentangle. This is because there are no markets for mortality-risk or morbidity-risk reduction. To try solving this issue, researchers have used non-market valuation techniques, including revealed preference and stated preference methods. Revealed-preference methods infer individuals’ preferences from their behavior in contexts that affect their mortality risks. Stated preference methods are based on respondents’ responses to hypothetical choices. Stated-preference methods have been more controversial than revealed-preference. As stated-preference methods rely on hypothetical choices, the critical question is under what conditions can stated preferences estimates be interpreted as informative about preferences?

In this article, Daniel Herrera-Araujo and James K. Hammitt develop validity tests for application to stated-preference estimates of willingness to pay (WTP) to reduce mortality risk, and apply these to data obtained by surveying a representative sample of French adults over the Internet. These tests (2) are satisfied by a conventional single-regression analysis of our data. Using latent class analysis (LCA), the authors identify important differences between respondents in their consistency with the validity tests and control for much of this heterogeneity . Estimates of value per statistical life from the latent class that is consistent with the validity tests are smaller than estimates from the standard analysis. The article proposes VSL estimates for France satisfying validity criteria. Estimates range from 2 to 6 million euros for adults and 6 to 7 million euros for children. How does the paper stand with respect to current French guidelines? The official VSL value used by the French administration is unique and amount to 3 million euros (in 2010). It does not distinguish between children nor adults, nor cancer related diseases. Moreover, today’s VSL values used in France are extrapolated mostly from VSL estimates on other countries. This paper provides evidence on individual preferences for mortality risk reductions in France, that might prove useful to inform future French VSL guidelines. At last, consistent with some recent literature, no evidence is found that WTP is larger to reduce risk of cancer than other fatal diseases.

(1) Thanks to Margaret Leighton for suggesting this example.