Home > Economics for everyone > For a wider audience > 5 papers...in 5 minutes ! > February 2017 > Pollution, Premature Deaths and Compensation 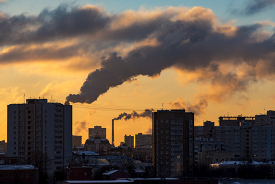 Environmental pollution – pollution of the air, water, soil – is one of the greatest causes of mortality. According to the WHO (2014), air pollution (fine particles) alone is responsible for the early deaths of almost seven million people around the world. The excessive death rate generated by a polluted environment is at the origin of significant life duration inequalities among people. Given the importance of longevity in realising one’s life projects no matter what our conception of the good life – these inequalities inevitably lead to a loss of well-being for the victims of pollution, that is, for those who die prematurely because of it. What can be done to reduce these inequalities and to compensate the victims of pollution?

In this article, Gregory Ponthière studies the question of compensation for victims of pollution. The matter raises difficulties that are linked to the singular nature of the damages involved. If we position ourselves ex ante, that is, before the durations of individual lives are known, then it is very hard to compensate the victims of pollution because they are difficult to identify. But if we position ourselves ex post, that is, once the durations of the individual lives are known, then obviously, it is impossible to compensate them, because they are already dead. Despite these difficulties, Ponthière shows that we can compensate victims of pollution and reduce inequalities in well-being between pollution victims and others. To do that, he develops a simple life-cycle model wherein production generates pollution which, above a certain threshold, leads to the premature death of a certain part of the population, a fraction that grows with the volume of pollution. In this model, individuals do not know how long they will live, and thus make choices to save and to work without knowing whether their lives will be short or long. On the basis of a problem of social planning, the article compares two distinct strategies with a view to compensating the victims of pollution. The first strategy is highly intuitive: by reducing production it is possible to reduce pollution, to bring it down to a level where it causes no more premature deaths. In this case, all individuals enjoy the same longevity. However, the main cost of this solution is a reduction in production and consequently also in consumption. The second strategy is less intuitive. It involves maintaining levels of production, but modifying the shape of consumption profiles over the life cycle, in a way that focuses on consumption at a young age and reduces consumption among the older. This solution consists of lowering consumption profiles with age in order to minimise losses among those who will, because of pollution, die a premature death. The cost of this solution lies in the fact that it amounts to imposing on everyone consumption profiles that diminish strongly with age, while the general tendency is to try to smooth consumption over the life cycle. It is clearly optimal for those who live long lives, but is the cause of significant losses for those whose lives are short. The article concludes that, when the critical pollution threshold beyond which premature deaths appear is high, it is the first strategy – reducing the pollution threshold – that maximises the well-being of those worst off. This strategy equalises levels of well-being in the population by equalising longevity. However, when the critical pollution threshold is slow, it is the second strategy – modifying consumption profiles – that maximises the well-being of the worst off, and equalises individual levels of well-being.