Home > Economics for everybody > For a wider audience > 5 papers...in 5 minutes ! > February 2019 > The effect of immigration on public finances in OECD countries

The effect of immigration on public finances in OECD countries 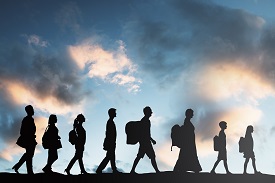 Nowadays, the 19 main countries of the OECD host more than 45% of the total number of migrants in the world. In addition, the proportion of migrants in these countries has increased from 7% in 1990 to 13% in 2017. Because global population trends include a predicted concentration of young people in Africa, immigration figures are likely to rise. Among the economic concerns that this increase creates, the effect on public finances seems to dominate public opinion polls. The prevailing sentiment is that immigrants represent a burden for the host countries.

Hippolyte d’Albis, Ekrame Boubtane and Dramane Coulibaly have evaluated the causal effects of migration flows on average income, the unemployment rate and public finances, using data from the 19 OECD countries between 1980 and 2015. They adapted methods used for evaluating macroeconomic policy to migration issues. These methods allow to identify the effects of international migration on economic and fiscal variables, taking into account interactions among all variables and, in particular, the effects that the economies considered might have on migration flows, for example through the generosity of their social protection systems.

Contrary to the popular impression, the estimates presented in this article show that the economic effects of migrant flows are generally positive for the host economies: they increase average income, reduce the unemployment rate and improve public finance budgets. The authors explain that these findings reveal the demographic dividend that international migration creates; in fact, migrant flows lead to a growth in the proportion of working-age people in the population, which has a series of beneficial fiscal and economic consequences. From the production side, the employment rate goes up, which leads to an increase in per capita GDP. This effect is stronger the higher the proportion of older people in the general population. For public finances, the change in the age structure caused by the migrant flows leads to a decrease in per capita general government transfers. Some public expenditures increase, especially that dedicated to family and children support, while others decrease, in particular those dedicated to retirement benefits and payments made to older people. All in all, the effect is positive, and the fiscal balance improves with international migration. Importantly, these benefits are observable from the first year of the increase of migrant flows.

In conclusion, international migration is at the center of many social, cultural and geographic issues, and is the source of thorny diplomatic problems. The fact remains, however, that these problems will be alleviated in part if the public debate concerning immigration refocuses on the political and diplomatic dimensions rather than on the supposed economic cost of migrants.

Original title of the article: « Immigration and public finances in OECD countries »