Home > Economics for everyone > For a wider audience > 5 papers...in 5 minutes ! > January 2016 > Bobos in Paradise: Urban Politics and the New Economy

Bobos in Paradise: Urban Politics and the New Economy

Short link to this article : http://bit.ly/1X0RGhf 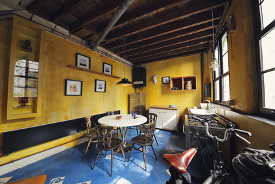 The gains made by the Left in the 2001 municipal elections were interpreted as a sign of the ascent to power of a new form of bourgeoisie: the bobos, “bourgeois bohemians”, characterised by a different way of life and different political preferences from those of earlier generations. While the concept of “bobo” is not well defined, it is associated with left-wing political opinions, a rejection of the traditional social codes of the ruling class (in cars, stereos, formal clothes, religious practices and the like), a taste for ecology and a desire to transform cities into human-scale places that promote conviviality. On the level of urban policy, getting rid of cars, and promoting public (or other collective) transport and the use of bicycles loom large. Do these changes simply reflect a form, an evolution in preferences explicable only as social trends, or can economic analysis shed some light on them?

In this article, Saint-Paul shows that the appearance of the bobos can be interpreted as a result of structural change towards a knowledge economy, whose activities are in culture, leisure, design, research and intellectual services. These require less space than traditional activity such as industry, logistics and distribution, which we expect to find at the periphery. The author compares three scenarios of urban distribution of workers and their consequences for transport infrastructure. In the first, managers, representatives of traditional activities, mainly occupy city centres: they are therefore users of efficient transport infrastructure that allow movement from centre to periphery. This means that we can explain collective choices such as embankment roads, tunnels and express lanes. In the second scenario, bobos overtake the managers in the city centres, following an increase in salaries in the knowledge sector of the economy. This new political balance is associated with different collective choices because the bobos work in sectors that require little space and have less need to travel to the periphery. For this reason, they are ready to sacrifice transport infrastructure and reallocate the space saved to other more recreational uses. While they are less rich, the bobos create an increase in housing prices that discourages a critical mass of managers from living in the city centre. In addition, in this scenario, the price of services goes up because unskilled workers in these services live on the periphery and watch their movements becoming more difficult and more expensive. Finally, the author presents a third scenario, which he calls bunkerisation. In a bunkerised equilibrium, less skilled workers live in the city centre: they offer their services to the bobos and no longer need to live out on the periphery. The increased cost of housing has repercussions for the cost of services, but, contrary to the preceding scenario, all managers are situated on the periphery and local councils are forced to increase the proportion of social housing. From this reading, the author studies the socio-economic changes of French towns over the past twenty years and classes them by degree of bobo-isation