Short link to this article : http://bit.ly/24LdlN3 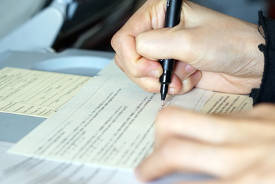 Immigration is at the heart of public debate and policy in numerous countries and notably in France. Before we can even discuss possible opportunities and risks engendered by immigration, we must know what it represents quantitatively. But compared with other demographic phenomena, such as births and deaths, immigration is difficult to measure because its contours are more blurred. The difficulty sometimes creates different estimates which, unfortunately, can be interpreted as a will to dissimulate the realities or to use them to discredit proposed policies.

In this article, d’Albis and Boubtane explain the difficulties in counting entries into France by foreigners from non-European countries. They propose an evaluation of legal immigration for permanent residence for the period 1998-2013. They use administrative data relating to the issue of residency permits, taken from the application files of foreigners in France. The field is comprised of people who were granted the first residency permit of one year or more, the authors analyse the entrants by age, gender, country of origin and legal category of residency admission. The number of permanent entries from third countries was an average of 175,494 people per year in the period, which is less than 0.3 per cent of the resident population of France. The immigrants are quite young, and more than half of them are women. The breakdown of the flow of migrants by country of origin greatly changed in the period. Those coming from African countries are in the majority, but their share of the numbers has diminished (to 57 per cent of the total in 2013, down six points since 2003), while the share of those coming from Asia went up slightly (to reach 25.3 per cent of the total). Analysis by nationality reveals that Algerians and Moroccans make up the largest percentages, followed by Tunisians and Chinese, the share of the latter having gone up greatly during the period in question. The majority of legal entries into France are those who were granted residency on the basis of family reasons (56.1 per cent in 2013), and are mainly members of families of French nationals. The pursuit of education constitutes the second largest category of entry into France (23.9 per cent). In the period under study, entries permitted for humanitarian reasons, which include refugees, rose but remained relatively low (8.9 per cent). Finally, immigration to France for professional reasons is very low (6.7 per cent).