Home > Economics for everyone > For a wider audience > 5 papers...in 5 minutes ! > January 2019 > Metacognitive ability predicts learning cue-stimulus associations in the (...)

Short link to the article : https://bit.ly/2BVw9Sd 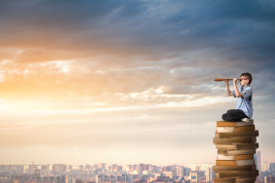 A funny saying has it that “predictions are difficult to make, especially when they concern the future!” (1). However, a good knowledge of our environment allows us, even so, in certain cases to predict whether one future event is more probable than another. Clearly, if an agent is capable of correctly predicting the future, then she can derive a significant advantage from it. We can then ask whether the agent has succeeded in recognising the predictive value of elements in her environment. How does the agent understand that when A is present in the environment, then X is more probable than Y? Usually, if the agent can distinguish between X and Y with certainty, then having observed A followed by X, she can update her estimate of the predictive value of A (the probability of seeing X rather than Y, knowing A), with the help of a Bayesian inference or a mechanism of learning by reinforcement, for example. However, what to do when the nature of the event that happens is not clear, that is to say, if the agent has seen A but afterwards is not certain that it was X rather than Y that occurred? One hypothesis is that the agent will use her confidence in the fact of having seen X rather than Y to guide her learning about the predictive value of A.

In this article, Hainguerlot, Vergnaud and De Gardelle formulate and laboratory test a consequence of this hypothesis. If agents use their confidence in having seen X rather than Y to learn that A predicts X and that B predicts Y, then we should see a link between their capacity to evaluate their confidence on the one hand, and their capacity to identify the predictive indices on the other. Some volunteers participated in a laboratory study in which these two capacities were measured in two distinct experimental sessions. In order to control the degree of uncertainty in the decision, a perception task was used: two collections of points were presented on a computer screen, and the volunteers had to indicate whether the collection contained more points on the right (even X) or on the left (event Y). In one session, the perception decisions between X and Y were followed by a judgement of confidence, to quantify each volunteer’s “metacognitive capacity”, that is, her capacity to formulate judgements of confidence well correlated with performance. In another session, the stimuli were preceded by indices (A predicts X, B predicts Y, C predicts nothing), which the volunteers had to learn to associate with the predicted events.The comparison of the data from these two experimental sessions allowed the authors to validate their hypothesis. Indeed, the volunteers who correctly associated the indicators with the predicted events had better “metacognitive capacities” (that is, those who were best at assessing their confidence in their decisions) than those who did not succeed in correctly learning the indicators. Supplementary analysis showed the consequences of this learning on performances in the perception task. Volunteers who learned well the correspondence between the indicators and the perceptive stimuli obtained supplementary information that helped them to decide if X or Y was presented on the screen. Thus, our “metacognitive capacity” is very useful: it helps us to learn in a situation of uncertainty, which helps us to improve our predictions, including for the future.

(1) Attributed to Pierre Dac, Niels Bohr and others, according to the sources.