Home > Economics for everybody > For a wider audience > 5 papers...in 5 minutes ! > January 2020 > What impacts do urbanization and nature disconnection have on environmental (...)

What impacts do urbanization and nature disconnection have on environmental quality?

Short permalink to this article: https://bit.ly/2NwC8Ui 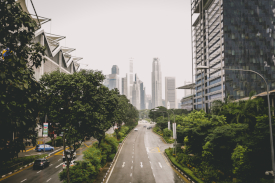 The increasing urbanization across the world has led to rising incomes which in turn tends to lead to larger investments in environmental quality (1). At the same time, this unprecedented transition into cities has led to a progressive reduction in human-nature interactions. Beyond the economic field, some social scientists note that this ’extinction of experience’ will lead to ’a cycle of disaffection that can have disastrous consequences’ (2). They argue that this lack of exposure to nature when young leads to a lower preference towards the environment when grown up, resulting in a lower willingness to invest in nature, and therefore lower environmental quality in the future. If this preferences effect which manifests itself through a disconnection from nature dominates the pure income effect, then urbanization could have devastating consequences for the distant future.

Original title of the article: Connectedness to nature, urbanization and the environment. Published in: upcoming