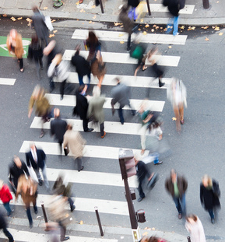 Income taxes may affect not only individual labour supply but also the amount of domestic work produced within the household. Income taxation is likely to affect labour supply and housework hours in opposite directions: downward changes in the individual rewards from work reduce the individual opportunity cost of housework and thus, housework becomes more attractive than market work. Most OECD countries have moved to a system of individual taxation or allow couples to choose between the two systems. France is one of the few OECD countries that still taxes the incomes of married couples jointly (1). This typically leads to a lower tax rate for the primary earner (usually the husband) and vice-versa, a larger tax rate for the secondary earner (often the wife) than under separate income taxation. For married couples, the tax rate on each additional euro depends on the earnings of both spouses. For cohabiting couples, who are subject to individual taxation, the tax rate on one’s earnings is independent of other’s earnings. As a consequence, women with low earnings pay no income tax when cohabiting, whereas married women do. In particular, considering the same final revenue, a married couple in which only one spouse works will pay as much income tax as a married couple in which both spouses work. This system of taxation is likely to create incentives for married women to reduce their labor supply and increase their household work. In this article, the authors test this hypothesis by expanding an existing model (2) to both individuals in a couple and by incorporating also household work in it. They estimate the model using data drawn from the “INSEE enquete emploi du temps 1998-99”, selecting individuals in a couple and applying to them the French income tax schedule (for cohabitant or married persons, according to their marital status) as a function of their predicted earnings and non-labor income. According to the estimates, partners’ housework responds significantly to changes in the own and the partner’s wage rate. They simulate the effects of a shift from the current system of joint taxation of married spouses’ incomes to separate income taxation and find that it would lead to opposite effects for the husband (often the main earner) and the wife (usually the secondary earner): her labour supply would increase while his would fall; and her housework would fall while his would increase (3). Replacing joint taxation with separate taxation of married spouses’ incomes would increase the wife’s participation in paid work by 2.3 percentage points and her average market hours would go up by 3.7%, while her housework hours would drop by 2.0%. The husband would partly compensate for the changes in the wife’s time allocation by increasing his housework hours by 1.3% and reducing his market hours by 0.8%. 1. Or “pacsés”, those two situations (mariés/pacsés) run along the article.2. See Van Soest, A. (1995), Structural models of family labor supply: A discrete choice approach, Journal of Human Resources, 30(1), 63-88. 3. Calcul : 30/100*3.7=1.11. Une femme qui travaille 30 heures par semaine avant la réforme, augmenterait son temps de travail de 1 heure par semaine. ......................Original title of the article : “Income taxation, labour supply and housework: A discrete choice model for French couples”Published in : Labour Economics, Volume 27, Pages 30–43 - April 2014Available at : http://halshs.archives-ouvertes.fr/hal-00966801......................© Christian Müller - Fotolia.com