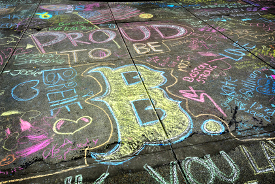 Few studies have attempted to quantify the socio-economic costs of terrorism for regions and countries that have long been exposed to terrorist attacks, such as Israel, Ireland and the Basque countries (1). Some have demonstrated the significant negative consequences on local economic activity – on GDP, entrepreneurship and the like (2); others have looked into the differences in weight between babies born in affected zones and those born in unaffected zones (3); and yet others have underscored the impact on the consumption of goods and services (that decrease among the “occasional users” of restaurants, buses, etc.) (4). In this article, Clark and Stancanelli study the effects of the deadly attack on the 2013 Boston marathon. More specifically, they look into well-being (notably, feelings), but also into Americans’ use of time before and after the event. They use data from the inquiry into allocation of time, and well-being carried out by the US Bureau of Labor Statistics. The authors stress that the attack led to a significant drop in individual well-being (of 1.5 points on a scale of one to six) for the residents of the states close to Boston. This drop is highly significant, much more so than, for example, a one percentage point decrease in GDP, or an increase of one percentage point in unemployment. In the detail, however, we see a gender difference: the declared happiness of American women diminished significantly, by almost one point, while that of men’s remained stable. This might be explained by a greater aversion to risk among women (5). According to Clark’s and Stancanelli’s estimates, a feeling of stress has also risen significantly since the attack; while the number of hours spent on leisure activities has decreased, the time spent at work has not changed. On the other hand, the authors saw no effects on individual well-being of the fatal shootings at the Sandy Hook school a few months earlier. They conclude that terrorism – in countries confronted by such events on an irregular basis – has a greater impact on individual well-being than other violent deaths. But in the long term, the effects of attacks seem to disappear.