Home > Economics for everyone > For a wider audience > 5 papers...in 5 minutes ! > June 2017 > Rationalizability and efficiency in an asymmetric Cournot oligopoly

Rationalizability and efficiency in an asymmetric Cournot oligopoly

Short link to this article: http://bit.ly/2u1zVEO 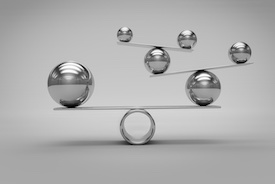 When firms envisage merging, they must inform the authorities that regulate market competition. Thus, the Competition Authority, the European Commission and the US Department of Justice might be brought in to pronounce on the same cases. A merger can only begin when it has been authorised; proof of that is the heavy fine inflicted on the Altice group for having started a merger with SFR and Virgin Mobile in 2014 without authorisation. In order to make their decision, competition watchdogs chiefly want to know what impact the merger will have on consumer well-being. They use the notion of “consumer surplus”, introduced by the economist Alfred Marshall at the end of the 19th century. This surplus is measured by the difference between the price the consumer is prepared to pay and the price that he actually pays. In the context of a merger, the consumer’s willingness to pay should not be affected if we suppose that the characteristics of the good (or the service) remain unchanged. Consumer surplus is thus governed by sale price. There is every reason to believe that this price will change under the influence of less competition or possible economies of scale that follow from the regrouping of production capacities. Competition watchdogs are thus led to formulate a theory of the price formation that will occur if they authorise a merger. Today, most of these authorities refer to the market equilibrium price where each firm correctly anticipates the production of its competitors. Let’s suppose, for example, that each firm wrongly anticipates that its competitors are going to produce a lot. Each deduces that the price will be lower and thus decides to produce little. Then, each firm, observing that its competitors are producing little, wants to produce a lot. Assuming the situation of equilibrium that would result from the merger, the authorities thus form the implicit hypothesis that each firm succeeds in correctly anticipating the production behaviour of its competitors. In this case, competition restrictions are accompanied by a higher equilibrium price, which penalises consumers and renders the authorities more reluctant to agree to a merger. At first glance, this hypothesis based on the analytical capacity of firms seems too optimistic.

In this article, Desgranges and Gauthier assess the hypothesis. Their conclusion is quite disconcerting: the hypothesis gains in plausibility when market structures most closely resemble a monopoly. Clearly, a firm in a monopoly position encounters few difficulties in predicting the behaviour of its competitors, because it has none! Let’s take two competing firms, one firm that dominates the market (which controls the larger part of existing production capacity) and a smaller one. No matter what the predictions, the smaller firm can adjust its production only marginally, while the other easily arrives at a correct idea of its production. But in turn, the smaller firm, knowing that the other firm reacts to its behaviour, also comes to understand its future production correctly. The authors propose a measure of the impact of a merger on the volatility of production. The method that they use suggests interpreting volatility as a reflection of the difficulty that firms encounter in coordinating their decisions. When firms see that their anticipations are incorrect, they must, in effect, revise their production decisions. Using the case of Delta Airlines and Northwest, two airline companies that merged in the US in 2008-10, the authors show that the variability of production (the number of passengers carried) on the proposed routes was lower than on those that they did not fly. The transfer of 1% of the market share of a small firm to one that dominates the market will reduce the volatility of production by around 1.5%. This stabilising impact concerns all companies flying the routes and not only those that are merging. Thus, it seems that competition authorities face a choice: by favouring more intense competition, they certainly push consumer surplus closer to the equilibrium, but at the same time they render the achievement of that equilibrium less likely.