Home > Economics for everybody > For a wider audience > 5 papers...in 5 minutes ! > June 2020 > What climate policies do the French support?

What climate policies do the French support?

Short permalink to this article: https://bit.ly/37E2exm 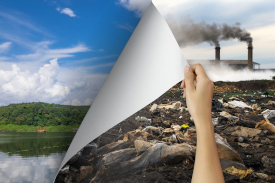 In light of the Yellow Vest movement and the great public support it had, at the end of 2018 the government cancelled its planned increase in the fuel tax. Should we expect all environmental policy initiatives to meet the same end?

In this article, Douenne and Fabre analyse the climate change policies that the French approved of at the height of the Yellow Vest movement, through the study of a representative sample of 3,000 people in February 2019. They analyse the knowledge, perceptions and beliefs related to climate change, examine opinions about emissions taxes and evaluate support for other climate policies. Their results show that the French generally share an understanding of the anthropogenic nature of climate change (72%); the proportion that does not is marginal (4%). At the same time, their knowledge is limited, particularly where it concerns the activities responsible for climate change, and the reduction of emissions necessary in order to contain it. Yet even without knowing how climate change functions, 80% of French are worried or very worried about its consequences. Thus, it appears that 82% of French people are ready to adopt a more ecologically sound way of life if certain conditions are met: adequate financial means, policies designed to attain them, and their application to everyone.

As to policies that the French approve of, they prefer norms and regulations over taxes (with the exception of an aviation fuel tax). More than 70% are in favour of stricter norms for new vehicles and an ambitious programme of the thermal renovation of buildings. On the other hand, the French are mostly opposed to a fuel tax, even if those taxes were to be redistributed equally to every adult, and even if such a measure would benefit (on average) the less advantaged (who consume less fuel than the average). Thus, 70% reject an increase in the Energy-Climate Contribution of 50€ per tonne of CO2 (resulting for example in an increase of 0.11€/L in the price of petrol), despite the annual transfer of 110€ per adult that would accompany it. This is partially explained by the lack of alternatives to fossil fuels, especially in rural areas, which makes such policies look, to many in the countryside, like punishment. It is also due to pessimistic beliefs regarding the properties of such a tax (analysed in a companion paper*), which are linked to mistrust of the government. This mistrust is particularly reflected in the position of the Yellow Vests, which seems to be the best predictor of environmental preferences, more explanatory than the traditional left-right spectrum.

Finally, the authors propose several popular policy measures that would allow France to speed up its ecological transition: first, the launching of a massive and sustainable information campaign that aims to deepen knowledge of climate change (which is associated with greater support for climate policies); second, the implementation of popularly-approved alternatives to fossil fuels: investments, subsidies and laws in favour of public transport, cleaner vehicles, thermal insulation, etc. Third, the introduction of a limited aviation fuel tax whose receipts would be distributed to every French person. This tax would serve as a convincing argument in favour of carbon tax incentives because the aviation fuel tax is widely approved.

Original title of the article: French Attitudes on Climate Change, Carbon Taxation and other Climate Policies Published in: Ecological Economics Available at: https://www.sciencedirect.com/science/article/abs/pii/S0921800919310705

Other publications on the same issue, by Adrien Fabre and Thomas Douenne: