Home > Economics for everyone > For a wider audience > 5 papers...in 5 minutes ! > March 2015 > Correlation within SNCF administrative regions among track segment (...) 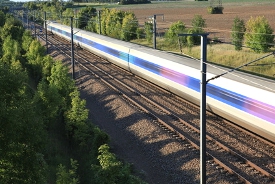 Numerous studies have been made of the costs associated with the maintenance of railway infrastructure, in France as elsewhere. They all aim to estimate the cost function on a national scale, but very few seek to estimate the differences that might appear within a country depending on geographic location – with the exception of some studies done in Scandinavian countries, which show the effects of climate.In this article, Gaudry and Quinet address this question for the case of France. They base their enquiry on an earlier model (1) explaining the level of service offered by the national railway infrastructure, the cost of its upkeep and the frequency of section renewal. They start from a variant of the explanatory equation of maintenance costs, in 30,000 km sections of the network (which has a total of around 700 sections), in order to explore the “residues” (2) that is to say, the difference between the cost per section calculated by the model and the cost actually observed. They show first that the residues per section are significantly correlated within the same SNCF administrative region (3) introducing a spatial correlation (4) identical for all the regions. Taking into account the spatial correlation by adding just one additional parameter significantly increases the quality of the adjustment, but in fact has no effect on the estimations of the other parameters in this equation of reference. Adding supplementary variables (notably climatic ones) does not weaken the strong correlation. Next, they studied the refinement of the hypothesis in a correlation common to the regions, by authorising, for five groups of regions each of which is associated with a major Parisian railway station, an internal correlation specific to this group and distinct from that which prevails within four other groupings of regions: this amounts to formulating each time a type-2 spatial correlation process. Other explanatory hypotheses of the correlation internal to the SNCF groupings, sociological ones, were tested without success. The authors conclude that there is no internal correlation between residues of two groups of regions (the North and the East), each representing 15 per cent of available segments, and that the earlier country-wide effect was due to the 70 per cent of sections in the rest of the country. Since the frontiers of these two groupings correspond quite closely to those of separate companies that were merged in 1938, it seems that accounting traditions and or local modes of management for programs of track maintenance can survive a long time within a firm that is in principle centralised......(1) cf. PSE Working Paper N°2011-03, Version 21 of 27 February 2015.(2) This relates to the difference between the amount for the maintenance explained by regression applied to the national total of sections and the expenditure seen for the sections in each administrative region. We show that these errors are random within some groups of regions, but not in the majority of them.(3) The national territory is divided into 23 regions.(4) A spatial correlation means that an error can be partly explained by one or several others, more or less close neighbours.