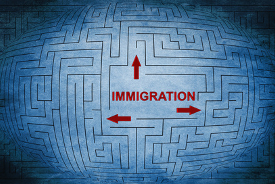 International migration is maybe the single most effective way to alleviate global poverty. Recent research shows that international migration has a substantial effect on poverty reduction in developing countries, both through the direct extraction of migrants out of poverty and through the feedback effects on those left behind (which include remittances as well as general equilibrium effects such as wage-responses to emigration). Hence, the delivery of visas to citizens of poor countries is akin to contributing to an international public good. It follows that when a given host country allows more immigrants in, this creates costs and benefits for that particular country as well as a positive externality for individuals and governments who care about world poverty. This also implies that the existing international migration regime is inefficient as it fails to internalize such externality. In addition, host countries quite often restrict immigration beyond a certain level due to its important perceived social and political costs; however, these costs are never measured and made comparable across countries, which hampers implementation of “rational” immigration policies (i.e., based on immigration’s true costs and benefits).This paper by Moraga and Rapoport tries to address these two issues: i) how to internalize the positive externality (global poverty reduction) arising from immigration of poor people from poor countries, and ii) how to reveal the true cost and benefits of immigration from the perspective of receiving countries. The authors argue that a tradable immigration quotas (TIQs) system can allow for catching these two birds with one stone. The first ingredient is the tradable quota system, which they adapt from the literature on pollution permits (with the important difference that the externality at hand is positive, not negative). It builds on the fact that destination countries face different immigration “cost functions” due to differences in age structure, unemployment rate, integration of past immigration, or cultural preferences for diversity. Whatever the reason, such costs differences imply that some countries have a comparative advantage in hosting immigrants. The second ingredient is a matching mechanism (adapted from the literature on the allocation of students to schools) whereby migrants preferences over destinations as well as countries preferences over migrant type can be taken into account in a way that makes the system incentive compatible (that is, allows for truthful revelation of preferences on both sides) and pareto-efficient. Moraga and Rapoport then evaluate whether the proposed system can be applied in practice by discussing two potential applications. The first potential application is a market for the resettlement of international refugees. This would seem quite natural as international refugee protection is well recognized as an international public good and the costs of setting up international coordination has already largely been incurred (with the creation of the UNHCR or, at the European level, of the Common European Asylum System). In addition, the current allocation of refugees is extremely imbalanced, with just a handful of OECD destinations serving as resettlement countries and the others free-riding of their efforts. The second potential application we envision is more speculative as it concerns the creation of a OECD poverty-reduction visa program adapted from the US green card lottery. This requires the determination of a target group — low-income countries? Countries hit by civil wars or natural disasters? — as well as the determination of initial quotas, possibly under participation constraints. The system is then simulated to demonstrate its possible workings under different immigration costs scenarios..................Original title of the academic article : “Tradable Immigration Quotas”Published in : Journal of Public Economics, Elsevier, 2014, 115, pp.94-108Available at : https://hal.archives-ouvertes.fr/hal-01045120.................© alexskopje - Fotolia.com