Households in Times of War : Adaptation Strategies during the Nepal Civil War

Short link to this article: http://bit.ly/1OdRHre 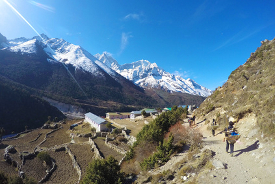 Among the costs of war, human losses and physical destruction are the first that come to mind, but the results of conflict are much broader. Many individuals who are not directly affected by the violence modify their decisions and adapt to the increased insecurity. Adaptation strategies can be quite different depending on social category. Conflict can have a redistributive effect at least in relative terms, and prove to be a growth generator. Also, one element of temporary adaptation strategies persist and shapes life trajectories, even when peace returns. It is crucial to understand this dynamic if we want to ensure that post-war policies benefit those in greatest need and avoid seeing countries, regions and households gripped in cycles in which war and poverty perpetuate, even reinforce, each other.

In this article, François Libois analyses the short and medium term consequences of war-time episodes of violence for the consumption and production decisions of rural households. The context of the study is the Nepalese civil war, a conflict that pitted the central government against a Maoist rebellion that lasted 11 years from 1996 to 2006 and resulted in 13,000 deaths. The article shows that in the short term, household income decreased during the conflict, but the greatest reduction was among high-caste households. This reduction is explained mainly by a decline in non-agricultural activity. High-caste households respond by reducing their consumption but also by sending their young productive men to urban areas, even overseas. Other castes do not systematically resort to migration. On the contrary, in the face of growing violence in their immediate surroundings, they invest more time in agriculture and thus offset a little their losses in income. Short-term strategies shape the trends of households in the medium term, too. Three years after the end of the conflict, non-high caste households continue to invest relatively more time in agriculture. That, however, no longer has a positive effect on their agricultural income; rather the reverse. High-caste households compensate for the income losses linked to agriculture by diversifying their sources of revenue and reducing the size of their households, two strategies in which migration plays a key role. This article is based on original data and an original methodology (1). The authors’ conclusions invite us to think about the role of violence as a vector of structural change in society. They also highlight the role that migration can play as a vector of household poverty reduction once the war is over. Given that numerous studies point to poverty as an explanatory factor in the causes of war, the medium-term benefits associated with migration can also reduce the probability of the emergence of new conflicts.

(1) The identification of the short-term effects relies on a household survey carried out in part during the conflict, and which compares the households surveyed just before and just after episodes of violence of varying intensity. The timing of the enquiry is used as a source of random variation in the exposure to conflict. In the medium term, the estimation strategy links changes seen in each household to spatio-temporal variations in the intensity of the conflict, by using the fact that the Maoists owed a share of their income to the sale of wood.