Short link to this article: http://bit.ly/1ruhDde 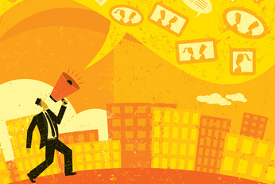 How do publicity campaigns manage to convince consumers to buy certain products? How do public media appearances persuade voters to voter for a man or woman in politics? How do national health campaigns persuade individuals to stop smoking, be vaccinated, or take up exercise? How does an expert convince a committee to adopt a certain project? To name just a few examples, what all these situations have in common is that an economic agent (firm, government, politician, expert, etc.) called the transmitter, seeks to persuade – by transmitting a single piece of public information – a number of individuals (the receivers), who can hold very diverse opinions. In other words, the transmitter cannot adapt the information to each individual; on the contrary, he or she must address the same information to all, publicly.

In this theoretical article, Marie Laclau and Ludovic Renou examine various scenarios for public persuasion by modelling the way in which a message publicly addressed by a transmitter modifies a posteriori the “beliefs” of agents. More precisely, the public nature of this transmission of information imposes constraints on the transmitter: for example, a politician cannot convince some agents that he is more right-wing while also convincing others that he more left-wing than they had initially believed. The authors show that this constraint boils down mathematically to a collinear condition on the plausibility ratios of the agents – the ratio is formed of the beliefs (1) generated a posteriori by a message “divided by” the agents’ initial beliefs. Laclau and Renou deduce from this the best possible scenario for the emission by the transmitter as well as the maximal utility that he or she can guarantee: the best that he can do is to influence the beliefs of one individual in particular, thus losing control of the other agents, who beliefs are calculated directly from the collinear condition. They also show that these recommendations become widespread among the target audience, that is to say, in the situations in which the transmitter can adapt his information transmission to groups of individuals.