Short link to this article: http://bit.ly/2nryz3a 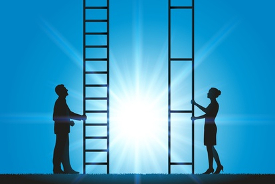 Although the public service employs a great many women, there are relatively few analyses of inequalities of remuneration between men and women in the sector. This blind spot is partly related to institutional recruitment and income-fixing rules of the public service that were added to the protective role of the unions, and which reduce possibilities for gender inequality. In France, public servant salaries are defined according to a set salary scale used by all administrative bodies in the country, which limits gaps between individuals. For permanent employees of the same grade and class, the basic salary is the same no matter who holds the post. For those on contracts, there is in theory more latitude in income-fixing, but in practice, incomes are often fixed with reference to those that would be received by a permanent employee with the same qualifications and professional experience doing the same job. Even if the total remuneration can differ from one person to another because of geographic location (the maximum bonus is 3%), bonuses attached to the position held and supplementary family allowances, it still is largely determined by the basic salary. However, income gaps between men and women are far from negligible in the public service, even if they are narrower than in the private sector. In 2013, the average net salary (for the same hours worked) for a woman in the public service was 85% of that earned by men (1), compared with 81% in the private sector (2). Given the existing rules, this gender wage gap can only be explained by an absence of women in the highest positions, a phenomenon otherwise known as the glass ceiling.

In this article, Fremigacci, Gobillon, Meurs and Roux consider this inequality in access by applying a method that measures differences in access to the highest ranks according to gender (3). The approach uses a common ladder of hierarchical positions, based on remuneration categories. The relative lag between the position of women compared with men (i.e., the fact that they are more numerous at the bottom of the salary distribution) is measured by an “access function”, defined as the ratio of probabilities of a woman and a man occupying a position in a given rank in the salary hierarchy, these probabilities being measured among the women and men a priori interested in the position, that is, who occupy a position just below it. This methodology was applied to exhaustive data from the SIASP (Système d’Information sur les Agents du Secteur Public) for 2010. For all the public servants and contract workers, this function decreases: for a woman, the probability of gaining a medium-level post is 80% of that of a man, and women make up only around one-third of the highest levels. This would thus seem to confirm the existence of a glass ceiling. At the same time, the access function frequently differs depending on various factors, whether you are at the territorial level or at the national level, the hierarchical category, stage of career (reflected by the candidate’s age) and the profession, all this determining the rules and practices of career development and the allocation of bonuses. For example, for permanent public servants aged between 40 and 45, there is no systematic difference between men and women among magistrates, nurses or health managers – indeed, there are more women than men in the nursing profession; but in others (teachers, administrative officers) the access function constantly decreases. Finally, beyond such focus on specific populations, it emerges that, despite the apparent uniformity of status and administrative regulations, there is substantial heterogeneity in the public service in women’s access to the best-paid positions, and that these differences depend particularly on the transparency of procedures for nominating for a given post.