Home > Economics for everyone > For a wider audience > 5 papers...in 5 minutes ! > March 2017 > Endogenous information revelation in a competitive credit market and credit (...)

Short link to this article: http://bit.ly/2mYOYOQ 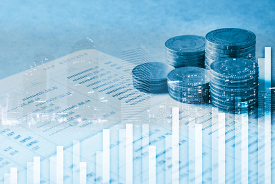 The financial crisis of 2007-08 was marked by a scarcity of credit, an increase in the interest rate and strong mistrust of institutions and financial agents whose structures were seen as opaque. Thus, the cost of borrowing for societies in the Euro zone went from 4.9% in January 2007 to 6% in September 2008. At the same time, the volume of loans decreased from nine billion euros in July 2007 to less than six billion in September 2008 (1).

In this article, Li and Wigniolle offer a theoretical tool for understanding this kind of phenomenon. They look at an economy composed of several firms resorting to borrow money to finance their projects. The quality of the projects is private information, which is not, a priori, accessible to the banks that will decide whether to finance the projects. This context of asymmetry of information between lender and borrower is very common in the financial world. The main hypothesis of their model and that firms can choose to be transparent or opaque, that is, to reveal the information about the quality of their projects or not, and that the revealing of this information creates a cost for the firms. The hypothesis has been treated in the theoretical literature, but never studied in detail. On the contrary, earlier work has generally assumed that the lenders must pay a cost to acquire information about the quality of projects. For Li and Wigniolle, the hypothesis that the cost (or a part of it) will amount to a cost for the borrower is salient. In the first place, to reveal information creates a direct cost, related to the firms audit costs. Second, to be transparent can also engender indirect costs, for example, not to engage in offshore activity, revealing information to competitors, etc. Staying with the idea that revealing information to the lender is costly, we are in the “signal” model, in which a firm can have an interest in paying to reveal the quality of its project. There are therefore two credit markets: one for opaque firms with a higher rate of interest, and one for transparent firms (which have assumed a cost) with a lower interest rate. The authors consider this hypothesis with a very simple model, with firms that are distinguished only by the quality of their projects. They show that three situations are possible in the equilibrium credit market (2). If the credit offer is generous, which involves a low interest rate, then no firm has an interest in revealing information and all are financed. This is the high activity equilibrium. On the other hand, if the credit offer is low, which engenders a high interest rate, then only the most profitable firms are financed and for that, they must divulge the quality of their project. This is the low activity equilibrium. Finally, for an intermediate credit offer, the two equilibria are possible in the credit market: if the best firms reveal their information, only the are financed; if they do not reveal their information, all firms are financed. There is then an interdependence between projects of greater and lesser quality, the weaker are financed only if the stronger stay in the opaque market, in order to assure sufficient average return to the lenders. The shift from the high activity equilibrium to the low activity equilibrium can be interpreted as a phenomenon of credit squeeze. All early results depend on the quantity of credit offered in the economy. In the second part of this article, Li et Wigniolle explain why the credit offer can be more or less abundant in an economy. The credit offer corresponds to the agents’ savings, which is especially determined by their income, which itself is linked to the credit market situation in the preceding period. Consequently, there is a joint development, period after period, of aggregate income and the credit market. For example, a negative income shock can lead to a shift from an opaque high activity equilibrium to a transparent low activity equilibrium, with an increase in the equilibrium interest rate and a decrease in the volume of allocated credit.

(1) Sources: FRED Economic Data; ECB Statistical Data Warehouse (2) A credit market equilibrium is a situation in which lenders and borrowers adopt optimal behaviour and the general credit supply is equal to the demand.