Short link to this article: http://bit.ly/2nmGamT 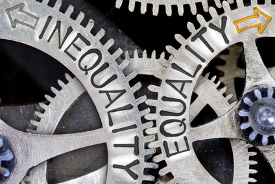 This article presents the new results on the dynamics of global inequality, produced by the World Wealth and Income Database (WID.world). Particular attention is paid to the contrast between American, Chinese, French and British changes. It looks in turn at the income inequalities dynamics, the relationship between public and private capital, and the dynamics of capital inequality.

In this article, Alvaredo, Chancel, Piketty, Saez and Zucman follow the methodology of Distributional National Accounts (DINA) in order to spread macroeconomic growth among different income classes. In the period 1978-2015, they observe strong cumulative growth in before-tax income of the most modest 50 per cent in China (401%), moderate growth for the same group in (39%) and negative growth in the United States (-1%). In the same period, growth in average income was 811% in China, 59% in the US and 39% in France. The incomes of the 0.1% most well-off grew more quickly than the average: 2261% in China, 84% in France and 321% in the US. In almost all the countries covered by WID.world, the authors observe an increase in income inequalities, but in the context of macroeconomic dynamics and very different political and institutional contexts. In terms of capital, they remark a net decline in public property to the profit of private property. In China, for example, the portion of public capital in total capital went from 70% to 35% between 1978 and today. In the industrialised countries, this portion went from 15 to 25% to less than 5% in the same period, reaching negative values in the UK and the US (where public authorities have more debts than shares). This decrease in public capital has had significant consequences on the levels of income and wealth, as well as on the dynamics of that inequality. The portion of wealth in China owned by the richest one per cent has doubled since 1995, growing from 16% to 30%. Unequal access to privatisation processes have played a central role in the increase of inequality in China, especially at the top of the distribution. In France and the UK, the dynamic is notoriously different: the portion owned by the richest one per cent has gone from 15% in the mid-1980s to around 20% today. The great increase in real estate prices has helped to mitigate the concentration of capital. In the US, the portion of wealth owned by the top one per cent grew from 25% to 42%. Higher income inequality combined with income stagnation for the poorest 50% explains such a high increase in the concentration of capital there.