Home > Economics for everybody > For a wider audience > 5 papers...in 5 minutes ! > March 2018 > Climate variability and inter-state migration in India 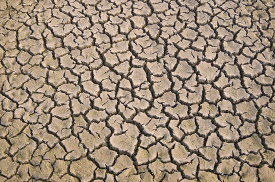 Migration induced by climate change occupies the current policy agenda. To cite just one example, a recent analysis quantifies the expected increase in asylum demands in EU countries due to weather anomalies (1). The existing literature on climate change and total, economic, migration flows can be categorized in three large groups. Whereas a first group of large scale studies analyses international migration flows and either weather anomalies or natural disasters, a second strand of the literature exploits detailed household survey data in an attempt to separate climate and weather variables from socio-economic determinants of migration (2). A third group consists of analyses using census data to analyse climatic factors and macro-level migration flows on a country level (mainly on the U.S. so far). The advantage of using census data is the complete coverage of documented flows and the exact definition of migration flows in space and time. Dallmann and Millock are among the first to use census data to analyse bilateral internal migration rates in a large developing economy such as India (3). The importance of studying internal migration stems from the cost of migration and the fact that most migration is internal rather than international.

Dallmann and Millock investigate the total effect of climate variability on inter-state migration in India by combining bilateral migration data from the 1991 and 2001 Indian Census with measures of drought and excess precipitation, two of the main climate events that affect India. The article displays several novelties: first, it uses the one-year migration definition from the Indian Census that permits an exact timing between climatic factors prior to migration and the observed migration. The authors compare the results with estimations using ten-year averaged migration flows and ten-year average climate variability; no significant effect is found using the ten-year average measures, whereas a significant effect is found in the estimations using the same measures of climate variability during the five years preceding migration and the one-year migration rate. Dallmann and Millock argue that these results help explaining the absence of evidence on international migration effects when using data averaged over five-year periods or decades (4). Second, based on the Standardized Precipitation Index (SPI), the authors construct measures of the frequency, the magnitude and the duration of droughts and excess precipitation events. The results show that only the frequency of droughts is statistically significant. In particular, the results show that one additional month of drought in the origin state during the five years preceding the year of migration increases the bilateral migration rate by 1.5%, averaged over all states. The findings on the frequency of drought may be interpreted as evidence of the expectations of future drought inducing migration. Observed frequency of drought tends to reinforce future expectations of drought and may hence induce migration. Finally, the authors examine separately three possible channels through which climate variability could induce inter-state migration: net state domestic product, the impact on the agricultural sector and urbanization. A decomposition of total inter-state migration into rural-rural and rural-urban migration shows that the effect of drought frequency is the strongest on rural-rural inter-state migration rates. An analysis on complete bilateral district migration data, which were not available at the time, would permit a more detailed analysis of the patterns of inter-district bilateral migration, which account for the largest share of internal migration in India. Interactions with policy could also be explored in future work on this important issue.

(1) Missirian, A. and W. Schlenker, 2017. Asylum applications respond to temperature fluctuations. Science 358,1610-1614. (2) See Millock, K., 2015. Migration and environment. Annual Review of Resource Economics 7, 35-60. (3) Previous studies on India either either analyse cross-section data from the National Sample Survey (Kumar, K.S.K. and B. Viswanathan, B., 2013. Influence of weather on temporary and permanent migration in rural India. Climate Change Economics 4(02), 1-19) or use census data to study out- or in-migration rates induced by agricultural shocks (Viswanathan, B. and K.S.K. Kumar, 2015. Weather, agriculture and rural migration: Evidence from state and district level migration in India. Environment and Development Economics 20(4), 469-492). (4) See, e.g., Beine, M. and C. Parsons, 2015. Climatic factors as determinants of international migration. Scandinavian Journal of Economics 117(2), 723-767.

Original title of the article: Climate variability and inter-state migration in India