How to organize evaluation voting? 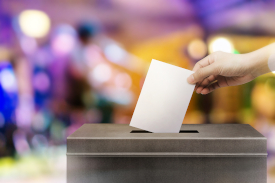 The recent « yellow vest » movement has revealed a crisis of political representation. Among the solutions proposed during the Great National Debate are proposals for more direct democracy (in particular the Référendum d’Initiative Citoyenne –Citizen Initiative Referendum), but also for changing the electoral mechanisms we use to select our representatives. Numerous public meetings have been dedicated to discussing the “Majority Judgement” model of voting (proposed by CNRS mathematicians Michel Balinski and Rida Laraki) in which each voter evaluates all the candidates, using notes such as “Very good” or “Fair”.

Antonin Macé has studied such voting methods in which voters assess each candidate. The introduction of voting “by evaluation” multiplies voters’ opportunities to express their wishes but raises the question of how to count the ballot papers, which can be done in a variety of ways. In the Majority Judgement system, candidates are compared by their median evaluation (separating the electorate into two equal parts), while in the system called “range voting” it is the candidates’ average mark that determines the choice between them. The aim of this study is to characterise this latter method, range voting, that is, to identify what differentiates it from other methods. Such an axiomatic approach can inform the choice of the most appropriate method. An initial result shows the simplicity of the counting: for a candidate, receiving a slightly higher assessment always has the same effect, and in every situation. Only the range-voting system verifies this. It seems attractive because it makes voting easy to understand. In a second phase, the author studied a weaker property: a rule is separable when, to separate two candidates, we can ignore the evaluations of voters who are indifferent to them both. It is clear that this property is satisfied by range voting but not by the Majority Judgement system. But is range voting the only method that does so? The article concludes that it is, when there are a great many marks (a continuum) and when these are symmetrical. On the other hand, for combinatorial reasons (in discreet mathematics), this result cannot be verified when there are only a small number of votes: Strange methods emerge, which are separable but do not resemble the range voting system.

What can we learn from this study? There are different ways of counting ballot papers and the vote-by-rating, or range voting, system distinguishes itself from the others by its simplicity. However, this conclusion does not close the debate about alternative modes of voting, and the experiments carried out by several researchers during French presidential elections since 2002 teach us that voters also appreciate other methods and that they promise more consensual results than those reached by the existing voting system.

Original title of the article: “Voting with evaluations: characterizations of evaluative voting and range voting.”