Home > Economics for everybody > For a wider audience > 5 papers...in 5 minutes ! > March 2019 > Market power and volatility in the air transport industry

Market power and volatility in the air transport industry 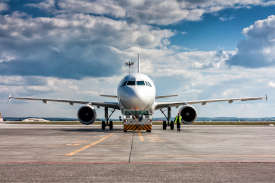 The popular belief that consumers benefit from competition through lower prices rests on the assumption that the market reaches equilibrium. When firms have market power, competition regulators usually refer to the Nash equilibrium: firms are assumed to be capable of predicting correctly the behaviour of their competitors. In a market where the quantity produced is the pertinent strategy, a lack of prediction skills can lead to instability. All firms can, for example, assume that their competitors are going to produce greater quantities than those they would produce in the state of equilibrium, which in fact results in each producing under the equilibrium quantity. The notion of equilibrium has rarely been subjected to questioning in economists’ models; however, the reality of the data can be very different, especially when the researcher sees a significant fluctuation in prices or quantities offered.

Belova, Gagnepain, and Gauthier propose an indicator that measures the degree of markets’ stability, then try to identify the specific characteristics of the markets that are subject to chronic instability. To do so, they use a database on air transport in the US from 2003 to 2013. In this sector, a market is defined as a pair of towns of origin and destination, for example the « New York – Los Angeles » market includes all services offered by all airline companies in that sector. Their theoretical model suggests that a specific market converges towards a Nash equilibrium if the stability indicator for this market is less than 1. The empirical findings show that the indicator is less than 1 for a large proportion of the markets studied, indeed, for around 90% of them. The authors observe that in these markets, the production level that firms choose is close to that they would choose in a state of equilibrium. For the remaining 10% of markets, a Nash equilibrium is not reached. The market structure is a very important element in understanding its stability. Markets that have difficulty reaching equilibrium are, unsurprisingly, those that involve a greater number of airline companies. In this case, the companies in question have more difficulty predicting the behaviour of their competitors. More generally, markets that pit equally-size firms against each other are the most unstable; conversely, markets of large and small firms are more stable because small firms, which have a more limited range of production strategies make strategic choices that are easier to predict. In addition, airline companies are confronted with higher production costs in markets that are relatively unstable, making it easier to argue that the least efficient airline companies (those that absorb the highest costs) also have more difficulty deciphering the strategic game in which they are participating. Moreover, the analysis suggests that past prediction errors are important in the learning process of each firm. Adaptive learning tends to stabilize the errors over time. The greater the past error, the less important the current error will be. It is also interesting to note that constructive errors are those committed two or three trimesters earlier, and not those of the last trimester, which suggests that it is hard for the firms involved to draw lessons from their most recent mistakes. Furthermore, small firms, for whom the treatment of information is costlier and who have less experience, seem less efficient in their learning processes than the big traditional companies such as Delta, American Airlines, United Airlines, and Southwest.

In conclusion, greater competition in a market like that of air transport is beneficial for consumers because it leads to a decrease in the price equilibrium. Nevertheless, a greater number of competitors renders a convergence towards equilibrium less likely. In this sense, competition aggravates the stability of the markets in question, which leaves consumers facing services and prices in constant fluctuation. Market regulation authorities thus should find the right balance between these two contradictory effects.

Original title of the article: “Market power and volatility in the airline industry”