Home > Economics for everyone > For a wider audience > 5 papers...in 5 minutes ! > March 2020 > How does diversity impact employment at the local level?

How does diversity impact employment at the local level?

Short permalink to this article: https://bit.ly/2UjEMPR 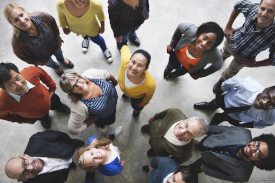 Western economies are facing intensified flows of people and consequently have to cope with increasingly mixed populations. Following the European Union enlargement process and the current massive immigrant inflows, this feature is particularly salient in European Union countries, where the economic and social implications of higher heterogeneity in terms of culture and national origins are becoming central issues.

In this article, Camille Hémet and Clément Malgouyres investigate the role of local diversity on individuals’ employment prospects: do people living in heterogeneous neighborhoods have different employment probabilities than those living in more homogeneous areas?. At the micro level, if different ethnic or cultural groups are hermetic to each other, in the sense that no interaction takes place across groups, then diversity can act as a barrier to communication, and in particular, to job information transmission. Given the importance of personal networks in the job search process, diversity could therefore reduce the chance of finding a job. On the other hand, if communication across groups is not an issue, then mixing people conveying nonredundant pieces of information (for example, due to different backgrounds) can certainly improve employment prospects. At a more aggregate level, diversity can affect employment probability through its impact on productivity, leading to ambiguous effects as well. On the bright side, diversity can be beneficial to productivity due to complementarity in workers’ skills. On the downside, heterogeneity can hinder productivity by preventing social capital formation. The effect of diversity on employment can thus go in two directions, and its sign can also depend on the level of aggregation considered.

Camille Hémet and Clément Malgouyres study this question using detailed data from the French Labour Force Survey (INSEE) that allow them to disentangle the effects of diversity at two levels of spatial aggregation: the very local neighborhood (defined as a set of twenty households on average) and the more aggregate commuting zone (defined as an area where most individuals both live and work) . Simple correlation between diversity and employment varies depending on the level considered: it is negative at the neighborhood level, but positive at the commuting zone level. Nevertheless, these relationships are not necessarily causal because individuals living in more diverse areas may have specific characteristics that also explain their labour market outcomes, leading to biased estimates. The authors rely on two different econometric methods to circumvent this issue at the two levels of spatial aggregation considered, taking advantage of the very precise localization of the data. At the commuting zone level, they find that diversity no longer exerts any positive effect at the level of the area of employment, suggesting that the positive correlation was driven by the selection process of the place of residence (namely: immigrants tend to locate in more economically dynamic areas). On the other hand, the small negative effect of diversity on employment at the neighbourhood level is confirmed. This result is in line with the idea that less communication between origins hinders the transmission of information about employment, thus reducing the employment prospects of residents of more diverse neighbourhoods.

Original title of the article: « Diversity and Employment Prospects : Neighbors Matter! » Published in: Journal of Human Resources Available at: https://ideas.repec.org/a/uwp/jhriss/v53y2018i3p825-858.html