Social- and Self-Image Concerns in Fair-Trade Consumption : Evidence from Experimental Auctions for Chocolate 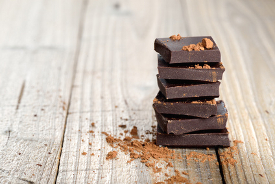 The development of fair trade is a way to improve the living conditions of producers, especially in developing countries. The success of fair trade sectors depends crucially on the readiness of consumers to pay for the fairness. From this perspective, Teyssier, Etilé and Combris investigate the effect of social interactions on the willingness of consumers to pay a premium to buy a kind of chocolate labelled fair trade, compared with what they are ready to pay for chocolate that is not labelled fair trade but is similar in taste.In this article, the empirical analysis is based on experimental auctions measuring consumers’ Willingness to Pay (WTP) for two types of chocolate. The difference between the WTP for each type measures the “fair-trade premium”. This premium can particularly reflect psychological benefits in terms of self-image and social image, to the extent that it indicates our readiness to “do good” in relation to a certain moral standard. The experimental conditions were created in order to identify these image effects. The authors show that when decisions are seen by other participants, the fair-trade premium increases, essentially because subjects decrease their WTP for standard chocolate while the WTP for fair-trade chocolate remains stable. Put another way, a consumer making a purchase in front of others tends to minimise her available budget for a standard product, to show more readily that she is ready to make an equitable purchase. Furthermore, when the researchers experimentally provoke a decline in moral standards perceived by participants, then the fair-trade premium also declines. Conversely, an increase in the moral standard barely affects the fair-trade premium. These results, obtained for a commonplace consumption good, contrast with results reported elsewhere in the literature, which generally takes as its object charitable donations, sponsorship and the purchase of “green” goods, that is, distinctive goods. While the authors confirm that the effects of image play a significant role, they also show that consumers’ main objective is to preserve that image at the least cost. They seek not distinction but conformity.......................Original title of the article : “Social- and Self-Image Concerns in Fair-Trade Consumption: Evidence from Experimental Auctions for Chocolate”Published in: European Review of Agricultural Economics, 2014, doi: 10.1093/erae/jbu036Available at : http://erae.oxfordjournals.org/content/early/2014/12/04/erae.jbu036.short......................© windu - Fotolia.