Home > Economics for everyone > For a wider audience > 5 papers...in 5 minutes ! > May 2016 > A network-based analysis of the European Emission Market

A network-based analysis of the European Emission Market

Short link to this article: http://bit.ly/293vEpY 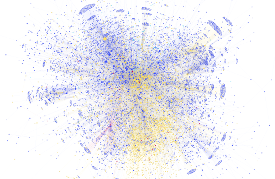 The European emissions trading scheme, the “carbon market”, offers a rare opportunity to observe in vivo the micro-economic functioning of a market. Indeed, each transaction on this market must be declared to the European Commission, which registers it and publishes it on a dedicated website. Using techniques of extraction (“web-scrapping”), it is possible to construct a data base containing all transactions made on this market since it was created in January 2005.

In this article, Karpf, Mandel and Battiston use this large data base to study how the market functions, utilising the structure of its transaction network. This network is formed of firms that have exchanged at least one quota during the period under study. The network structure can be represented by a scatter cloud, which reflects the functioning of the market. Several observations emerge from this image: on the one hand, a hyper-connected network heart connects all financial intermediaries and some large firms; on the other hand, a periphery appears, comprising a series of concentric circles of smaller firms, which access the market only by a series of intermediaries. This structure reflects the organisation by mutual agreement of the market: in order to sell or buy quotas, medium-size firms approach their usual financial and commercial contacts, and a series of intermediaries is required so that supply meets demand at the heart of the market. The excessive centrality of some agents also suggests the possibility that they obtain more information than others about the state of the market and use it to make “speculative” profits. If, on the other hand, the market had been organised around just one stock exchange, the image of the network would appear much less hierarchical and organised because the partners in an exchange would have been selected randomly, having been given compatible supply and demand requests. Analysis of the market through network theory thus tests hypotheses about the strategic exploitation of asymmetries in information on the financial network. The authors show in particular that the most central agents have a significant effect on quota prices, the “bid-ask spread”, and profits. Finally, it seems that the carbon market is subject to significant transaction costs that undermine its first goal, which is reduction in greenhouse gas emissions in Europe, at the lowest price. Recent developments suggest that the market is getting closer, by a self-sustaining dynamic, to an organisation centred around several exchange platforms. However, this institutional change is extremely slow: almost 15 years have passed since the market was created. A better initial design would have been very beneficial for European climate policy.