Home > Economics for everyone > For a wider audience > 5 papers...in 5 minutes ! > May 2017 > Inequality, poverty and the intra-household allocation of consumption in (...)

Inequality, poverty and the intra-household allocation of consumption in Senegal

Short link to this article: http://bit.ly/2qwbUrB 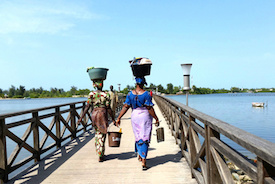 Classically, measurements of inequalities within a country ignore the inequalities that exist within households. Little effort has been made to measure the allocation of resources inside households, though this could help us to re-examine the question of inequality and poverty.

In this article, De Vreyer and Lambert depart from the usual practice of measuring household consumption with a single informant and have instead collected, through the PPSF study (1) in Senegal, data about consumption by sub-groups within households. Each person with “dependants” in a household was asked about their spending on goods whose consumption is individualisable (clothes, mobile phones…). This individualised collection also reduces forgetfulness and leads to a higher total measured household consumption, complementing the results of other investigations (2). As well, in the Senegalese context, where individual household members can have private incomes that are not known to all, asking each person separately means that consumption that is usually “hidden” can be measured. In total, this study recorded consumption almost 30 per cent higher than that recorded six months earlier by the standard-format national consumption enquiry. This re-evaluation is more significant for households in which there are several sources of income and more hidden consumption. Thus, consumption among the poorest households is little affected by this method, in contrast to households higher up the income distribution scale. Distribution is thus “stretched” upwards compared with the distribution observed in the traditional study, and poverty is greater: the Gini coefficient is 0.54 here (3), rather than the 0.4 reported in the traditional study. This is a major re-evaluation of inequality and changes completely the image that we have of the spread of resources in the country. Furthermore, in this article, the authors develop an approach to measuring inequality within households. Within the set of inequalities measured by the Theil index, intra-household inequality “weighs” 16 per cent of the total. In other words, one sixth of all inequality arises from intra-household inequality. To understand the importance of this, we must compare this figure of 16 per cent with a maximum intra-household inequality. Hypothetically, this reaches 26 per cent and is measured thus: after identification and equitable attribution of collective expenditure (food, electricity), one individual – the head of the household – is allocated all the individualisable consumption. This significant intra-household inequality – representing a little less than two thirds of what the maximum inequality would be – implies that certain households whose average per capita consumption is above the national poverty line contains members who fall below that line and who must therefore be considered poor, thus 12.5 per cent of the poor are “hidden” in non-poor households (4). The immediate implication for public policy is that measures that target the poor relying on aggregate household measures of consumption miss part of their target. It must also be noted however that the poor living in non-poor households are less disadvantaged than the poor living in households in which all members live below the poverty line.

(1) Poverty and Family Structure (2) The disaggregated the survey, the higher the recorded consumption. (3) Ignoring, for the moment, inequality within households. (4) While the intra-household inequality share of total inequality is not very sensitive to errors of consumption measurement, the share of “hidden” poor is very sensitive.