Short permalink to this article: https://bit.ly/3dPDqo2 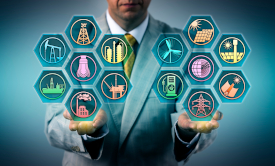 The French law on the energy transition for green growth (La loi relative à la transition énergétique pour la croissance verte) sets the goal of raising the share of renewable energy to 32 % of gross final energy consumption by 2030. To achieve this goal and to stimulate demand for solar panels and windmill turbines, “every kilowatt hour put into the public grid will be bought by a buyer obliged to pay a feed-in tariff, fixed in advance”. The rationale behind this policy has been to take advantage of learning effects that is, the accumulation of experience over time, to reduce the costs of renewable energies. European governments are also betting on anindustrial side effect: the promotion of national or at least European leaders. However, this second objective has not been met because all the European producers of solar panels left the market following the introduction of feed-in tariffs. One possible explanation is that these tariffs, which benefit not only European enterprises but also others in our current climate of free trade, have increased the efficiency differences between Asian and European producers.

In this article, Catherine Bobtcheff, Claude Crampes and Yassine Lefouili examine the circumstances in which the potential exclusionary effect of learning effects can be amplified by an industry-wide demand shock like that provoked by the use of feed-in tariffs. Two asymmetrical firms compete over the volume delivered to the market (Cournot competition) in two periods. The marginal cost in the second period for each firm depends on its production in the first period, thus demonstrating learning effects. The analysis seeks to find whether a positive demand shock in the first period increases or diminishes the probability that one of the two firms disappears during the second period. In two simplified scenarios, the analysis shows that the result depends on a number of factors.

In the first scenario, the function linking price to demand is linear, as are the learning effects. In this case, while the difference between marginal costs in the second period is systematically increased by a positive demand shock, it does not always lead to an increase in the probability that one of the firms will leave the market. Indeed, it is not the difference between the marginal costs of the two companies that decides whether a monopoly appears in the second period but rather the difference between the monopoly price of the most efficient firm and the marginal cost of the least efficient. The analysis shows that firms must be sufficiently asymmetric in their learning capacities for the subsidies to increase their exclusionary effect.

The second scenario allows to abstract from the intertemporal strategic effects and focus on how the demand shape can affect the way learning-by-doing is altered by a demand shock. The study shows that if the difference between the firms’ demand curves in the first period is sufficiently large, then a positive demand shock will increase production by one of the firms and decrease production by its competitor. In this case, the shock increases the exclusionary effect of the learning outcomes for the firm with the lowest demand curve. We should note that the demand shocks in this model can be reinterpreted as (unit) cost shocks, such as supply subsidies or corporate taxes. The results suggest in particular that in the presence of learning effects, taxation, like subsidies, can have counter-intuitive and undesirable effects on market structures.