Home > Economics for everyone > For a wider audience > 5 papers...in 5 minutes ! > November 2014 > Environmental Policies under Debt Constraint 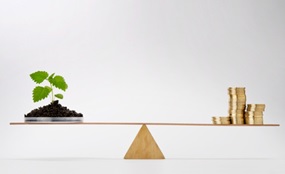 Environmental policies are often constrained by budgetary goals that require the control of deficits and public debt. What are the consequences of a high level of public debt on environmental policy? This is an issue for most developed countries, which since 2008 have faced a crisis in public debt that has relegated environmental concerns to the backburner. One illustration of this is the French abandonment of a carbon tax plan (in 2010 and again in 2014). In this article, Fodha, Seegmuller and Yamagami study the consequences – which are neither obvious nor predetermined – for public finances of an ambitious environmental policy. Indeed, two scenarios can be envisaged : the environmental policy increases the deficit (and thus the level of public debt) if it depends on an increase in public spending without appropriate funding; this policy can be accompanied by an awareness of the need to repay the public debt, which prompts authorities to find new sources of tax revenue. In the second scenario, pollution is an interesting tax base. The authors study multiple environmental policies that combine these two scenarios to differing degrees: increase in public expenditure in favour of the environment, and lowering of tax on labour and public indebtedness. These strategies are assessed using a theoretical model of overlapping generations. The authors consider that an ambitious environmental policy should lead (in the long-term) to a triple dividend: first, the environmental tax, by modifying relative prices to defavour pollution, should increase the quality of the environment. Then, the well-being of consumers should increase, either through a reduction of taxes on wages, which increases purchasing power and thus household consumption, or by the improved financial conditions created by the lowering of interest rates. Finally, the efficiency of the tax system should improve (be less distorted) and or lead to a surplus of tax receipts which would decrease the debt. The study shows that such a scenario is possible if the economy is in a state of under-accumulation and if public action on the environment is relatively important. The simultaneous occurrence of these three dividends constitutes a solid argument in favour of a greening of the taxation system. Unfortunately, the article also shows that the generation that will put this reform into effect will reap only net costs from it. This is the challenge that the current generation must face up to.Also see: