Home > Economics for everyone > For a wider audience > 5 papers...in 5 minutes ! > November 2015 > An allocation rule for dynamic random network formation processes

Short link to this article: http://bit.ly/1PjxrIK 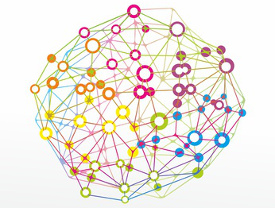 Networks, whether social or economic, have become very present in our daily lives. Accordingly, they are the object of numerous studies in both sociology and economics, in operational and IT research. Among the diverse aspects of social networks (1), whose members are connected and assumed to exchange, communicate and collaborate, one involves the “value” of network. We can also ask what is the (individual) value of each network member. The word “value” is used in the broad sense, which varies depending on the context: it can refer to the monetary value produced (the benefit) or, in another setting, to the power to influence or control (in the case of a political network, a terrorist network, a network of companies in a certain sector, etc.). Starting with a function that attributes a value to each potential network, ranging from the most elementary network of only two actors to a complete network in which the whole world is connected, we can assess the real value of each player. In the case of monetary value, the question becomes: what part of the final benefit will we allocate to each player (hence the term “allocation rule”)? In the case of power to influence, what is the degree of influence or control of each agent? Who is the mastermind? The different rules that have been proposed until now neglect the dynamic aspect of the problem: a network is never static and it changes over time, because new links form while others dissolve. In this context, how should we define an allocation rule that take into account the dynamic aspect of networks?

In this article, Jean-François Caulier, Michel Grabisch and Agnieszka Rusinowska focus on the dynamic aspect of networks, using an original theoretical approach that consists of assuming a random evolution of the network, and they propose a new allocation rule. Between two successive stages of the network, a contribution by each agent to the value of the network is calculated, taking into account all the possibilities for the creation/suppression of new links between two agents. The model they propose is highly flexible beacuse there is no restriction on the process of network formation. The authors also give an axiomatisation of their allocation rule, that is, the minimal totality of properties that characterises it in a unique way. This offers a deep understanding of the allocation mechanism.

(1) The social networks are not only digital ones here, they are in the more general sense networks of individuals or organisations linked to each other by individual social interactions.