Home > Economics for everyone > For a wider audience > 5 papers...in 5 minutes ! > November 2015 > Wealth effects on consumption across the wealth distribution: empirical (...)

Wealth effects on consumption across the wealth distribution: empirical evidence

Short link to this article: http://bit.ly/1QFg8Dp 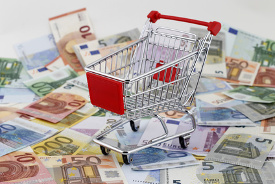 The link between consumption and wealth has been at the heart of some key questions of economic theory for some time. According to the cycle-of-life hypothesis of the 1950s, accumulated wealth meant that households could smooth their consumption over time, that is to say, separate the temporality of expenditure from that of resources, particularly in expectation of lower income at retirement age. Therefore, any non-anticipated (and permanent) variation in the increase of wealth has repercussions, because of what is called the “wealth effect”, on consumption patterns: the richer one is, the more one spends. Measuring this effect is essential to political economy, especially in the light of the great variations in real estate and stock prices in recent years. This impact of wealth value on household consumption is usually studied at the macroeconomic level. Aggregate estimates for France show that one euro of supplementary wealth leads to an increase in consumption of 0.80 to 1.00 euro and generally conclude that the “wealth effect” is more important for financial than for real estate wealth.

In this article, Luc Arrondel, Pierre Lamarche and Frédérique Savignac take a microeconomic view of the effect of variations in wealth on the level of consumption. Their empirical study uses microeconomic data from the Patrimoine 2010 (Wealth 2010) inquiry in order to estimate the marginal propensity to “consume wealth”: to put it another way, “how many more euro-cents am I prepared to spend if my wealth grows by one euro?”. These data go beyond the macroeconomic debate because they take into account numerous individual heterogeneities in consumption patterns, as well as the total and composition of wealth. The results confirm that marginal propensity to consume wealth is generally weak, in the order of 0.5 cents per euro of supplementary income. It depends, however, on the nature of shares and presents significant disparities across the wealth spectrum. Thus, marginal propensity to consume financial wealth is greater by 11 cents per additional euro among households whose net worth is less than the median (115,000 €), while it is zero for households of the richest decile. This “wealth effect” is clearly lower and less stark when the value of the principal residence increases by one euro: 1.1 cent where net worth is lower than the median, and 0.7 cent for the richest ten per cent. Further, it is more significant for owners who have taken out a mortgage on their property. These policies do not have the same impact on demand and growth for some types of shares and the household categories that are most affected. This microeconomic analysis also brings to light a “wealth effect” more marked for the least comfortably-off households: it is thus a result that monetary and tax policies must take into account.