Home > Economics for everyone > For a wider audience > 5 papers...in 5 minutes ! > November 2016 > Competition for the access to and use of information in networks

Competition for the access to and use of information in networks

Short link to this article: http://bit.ly/2gwsHlG 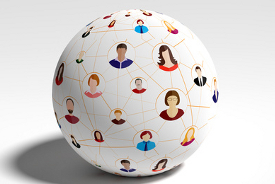 In addition to public information, diffused by sources such as the media, and available to everyone, most of us also receive valuable information that circulates only in a restricted manner, between friends and acquaintances. Access to such decentralized information certainly matters in many contexts. For example, numerous studies have shown that direct and indirect personal contacts are the most frequent providers of information that leads to finding a job. Information transmission can be modeled in a setting in which individuals form a network consisting of links that represent social relationships offering benefits in terms of information and involving some costs. Individuals behave strategically and aim at maximizing the benefits in terms of information flow that they receive in the network. At first sight, we might think that a denser social network would benefit everyone by providing more information, at least if we disregard the cost required for maintaining the relationships. However, this relies on the underlying assumption that information is what is known as a non-rivalrous good, that is, a good which used by several individuals simultaneously provides each of them with the same utility as if he were the sole user. At a closer look, the validity of this assumption seems to depend on the nature of the information. For instance, someone who learns of an attractive job opening would certainly prefer that few other people were informed. Similarly, learning of an early sale of coveted concert tickets or where there is available parking in a crowded part of town is more valuable when the information is not widely shared. For this reason, it is natural to integrate a negative externality that captures how much an agent’s utility declines when he has to share his information with others. But, in other cases, information is truly a non-rivalrous good: I am glad to be informed that rain is predicted in the afternoon because I can bring my umbrella and my well-being is in no way reduced by the fact that others find out too and bring theirs. Another point to consider is that even in cases where the use of information is non-rival, there may be competition for the access to it due to the so-called congestion effects. Agents with many contacts are less likely to spend as much time with each one of them as someone who has a small number of contacts. This may translates into a lower probability of transmitting useful information to each one of the contacts. In this case an agent is not per se unhappy that other people receive information. He is unhappy if others receive it instead of him.

In a theoretical paper , Philipp Moehlmeier, Agnieszka Rusinowska and Emily Tanimura discuss how to model the negative externalities associated with connectivity resulting from the two aforementioned effects in a network formation game framework. They consider two models, to capture the competitive use of information and the competitive access to information, respectively. Their main results concern on one hand pairwise stability which is the fact that no agent wants to delete his existing links and no two agents both wish to form a new link with each other. On another hand they concern efficiency which corresponds to total utility of all agents being maximized. In particular, their analysis sheds some light on the main differences between the effects of competition for the access to information and the competitive use of information. Depending on whether agents face competition for the access to information or competition in the use of information, their network formation strategies will be rather different. Under competition in the use of information, the desire to avoid being informed after others will incite agents to create new links to bridge large distances. If costs are low, the stable networks have short diameters and may be densely connected, sometimes too much so from the point of view of efficiency. Under competition for the access to information, on the other hand, densely connected structures are not plausible unless costs are very low. In this context, the source of disutility is congestion, a problem which is aggravated in densely connected networks. Longer communication chains can be more stable and efficient than structures with short diameters because there is less congestion when information is transmitted.

………………..Original title: “Competition for the access to and use of information in networks”Published in: CES Working Papers, 2016.33Available at: https://halshs.archives-ouvertes.fr/halshs-01316936/