Home > Economics for everybody > For a wider audience > 5 papers...in 5 minutes ! > November 2016 > Merchants of Doubt: Corporate Political Influence when Expert Credibility (...)

Short link to this article: http://bit.ly/2gF4AUU 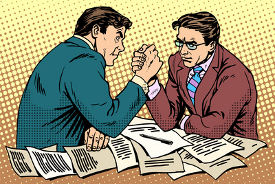 One of the key roles of scientific expertise NGOs is to contribute to the transmission of scientific knowledge to legislators. However, it has been observed recently that some interest groups linked to industrial interests are trying to weaken the capacity of these NGOs to influence political decisions, by undermining their credibility and by creating or supporting interventions by experts holding opposing opinions. As journalists Naomi Oreskes and Eric Conway showed in their 2009 book “Merchants of Doubt”, this has happened in the cases of the health effects of tobacco, the hole in the ozone layer, and climate change.

In this article, Mireille Chiroleu-Assouline and Thomas Lyon analyse the mechanisms by which a firm can profitably cast doubt on scientific information. Their model considers the interest groups who engage in lobbying while legislators are subject to the fixed costs of decision making. The extent of possible environmental damage and the probability of its occurring are assumed to be known by all the actors in the same way, before supplementary scientific information is provided by the interest groups. Preliminary results establish that industries that would suffer from the implementation of a policy have the advantage that the ideological bias of NGOs in favour of the policy is not known with certainty. They can, then, adopt tactical behaviours of concealed influence in the process of political decision making. Two tactics are envisaged in this article, both aiming to accentuate the advantage taken by industry over the incertitude of NGO biases. The first consists in furnishing possibly false but non-verifiable information in order to make the NGO look like a radical extremist group whose lobbying is not credible, and then to push the political decision maker not to legislate. The mechanism discussed here is based on a process of Bayesian persuasion, which amplifies the uncertainty of the NGO’s ideological bias, but without affecting the hope of this bias which itself is common knowledge. The second tactic works through the creation of a think tank that can offer its expertise on scientific subjects requiring regulatory decisions, but whose ideological bias is intentionally presented in a fuzzy way. One of the most striking results of this model is that industry prefers that the think tank not behave in a moderate and credible way, but rather take non-credible radical positions from time to time. Mireille Chiroleu-Assouline and Thomas Lyon identify the conditions under which one of the mechanisms is preferred over the other. When the cost of implementing the legislation is sufficiently low, that is to say, when in a perfect information situation, any legislation can be introduced, it is impossible that a loss in NGO credibility will lead to a profitable result for industry. In this situation, industry prefers to create a think tank. Where the cost of implementing the legislation is very high, to the point of preventing any or all legislation, even in a situation of perfect information industry has no need to launch one of its tactical studies. On the other hand, for the intermediary values of this cost, one of these tactics is preferred over the other, according to the relative perception of the relative credibility of the NGO and the think tank. If the NGO is seen as much more radical than the think tank that could be created, then the tactic privileged by industry is always to discredit it. In the contrasting case, the creation of a think tank is preferred where the costs of implementing the legislation are relatively low. ………………..

………………..Original title of the article: Merchants of Doubt: Corporate Political Influence when Expert Credibility is Uncertain”Published in: Working Papers FAERE, n°2016.28Available at: http://faere.fr/pub/WorkingPapers/Chiroleu-Assouline_Lyon_FAERE_WP2016.28.pdf