Home > Economics for everyone > For a wider audience > 5 papers...in 5 minutes ! > November 2017 > How does transportation shape intrametropolitan growth ? An answer from the (...)

How does transportation shape intrametropolitan growth ? An answer from the Regional Express Rail 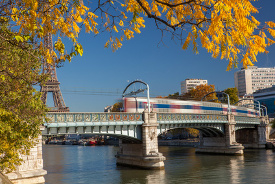 Urban development policies usually involve massive investment in road and rail infrastructure. For example, the Société du Grand Paris is currently investing 29 billion euros in a new metro and the modernisation of the transport system for Paris and the surrounding Ile-de-France region, which is equivalent to around 1.3 % of French GDP. The emerging economies are doing the same thing: currently, nearly 20 % of World Bank loans are intended to finance transport infrastructure, more than is loaned for social programmes. It seems essential, then, to measure the effects of these investments on the cities concerned: does improving transport infrastructure have an impact on local economic growth?

In this article, Garcia-Lopez, Hémet and Viladecans-Marsal study the case of the Ile-de-France, which has undergone significant changes to road and rail transport infrastructure over the past 50 years. Using the history of the development of the main road axes, and the suburban and regional train system (RER) between 1968 and 2010, the authors address the following question: what effect have these investments had on the growth of employment and the population of the municipalities in this region? There is no simple answer. It is not enough to look at a simple correlation between the presence of certain infrastructure (a railway station, for example) in a municipality and the growth of employment in it. Indeed, public authorities generally do not decide on the location of a train station randomly, which creates the risk of biasing the results seen. For example, the decision makers can choose to build a new station in an economically dynamic zone, in order to meet the anticipated transport needs of workers. In that case, the effect of the infrastructure on growth would be overestimated. Conversely, they could decide to build a railway station in a disadvantaged area, with the aim of opening up the municipality and promoting access to employment for the local population. In that case, the effect of the investment would be underestimated. To overcome this difficulty and to estimate an effect without bias of transport infrastructure on local growth, the researchers use the traces of old Roman roads and 1870 railway tracks to explain the location of current transport infrastructure independently of existing economic conditions. Thanks to this technique, called variable instruments, the authors of the article reveal the leading role of the RER (compared with other train networks and major roads in the Ile-de-France) on growth of employment and population in the region’s municipalities. They estimate that situating an RER station one kilometre closer to a municipality would see a 1% increase in the local population and an average of 2% growth in employment. This effect is particularly strong for communities situated at the periphery of a secondary activity centre (outside Paris): in this case, reducing the distance from an RER station increases population growth by 9% and employment growth by 12%. In addition, the impact on the population appears much more rapidly than the impact on employment, suggesting that individuals are the first to be attracted by new transport services, followed by businesses.