Home > Economics for everybody > For a wider audience > 5 papers...in 5 minutes ! > October 2015 > Price dynamics on a risk averse market with asymmetric information

Price dynamics on a risk averse market with asymmetric information

Short link for this article: http://bit.ly/1lMewdH 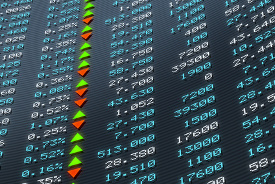 Information asymmetries are everywhere on financial markets: typically, institutional investors have greater means than private investors to deal with the flood of information and therefore have a de facto information advantage over others. In this situation, informed actors are known to all and their acts are analysed by other agents in a bid to deduce their information content. Accordingly, the strategic use of information by informed actors has a significant effect on observed price dynamics. Bernard De Meyer has been interested in the case of a market indifferent to risk, where agents seek to maximise the expected final value of their portfolios. In this model, share prices change randomly, in “saw-tooth” fashion. The appearance of such dynamics in finance is generally explained by the invisible hand of the market, resulting from an exogenous hazard (1). According to B. De Meyer, the appearance of this kind of dynamics can, on the contrary, be explained endogenously: the hazard is partially introduced by informed agents who use mixed strategies with the aim of not revealing too quickly the information they have, from which they are trying to draw the maximum benefit. It also seems that in the risk-neutral context, Nash equilibrium price dynamics (2) follow a random process of a very particular type, called the Martingale Continue à Variation Maximale (MCVM). Martingales are processes in which actual value is equal to the average value expected for tomorrow knowing all the information at one’s disposal today. In particular, the class of MCVM is that which maximises variations throughout the duration of the game while maintaining a fixed final distribution. This class of dynamics seems very robust because it appears no matter how exchanges between financial actors are made.

In this article, Gaëtan Fournier and Bernard De Meyer introduce the effect of risk aversion in the models discussed above. While indifference to risk means a zero-sum exchange game, this is a non-zero-sum game, which is more complex to analyse. The Nash equilibrium prices no longer form a martingale. The authors show, however, that there is a single equivalent measure of probability (3) according to which prices are martingales. With this probability, while the players play more and more frequently, the price process is an MCVM. This conclusion opens the way to elaboration of new formulae for the evaluation of financial assets and creates the potential for new hedge strategies.

(1) A hazard should originate from factors exterior to the market. (2) The Nash equilibrium is a situation in which players’ choices are stable: no player can unilaterally modify his strategy without weakening his own position. (3) Two probabilities are called equivalent if an event possible for one is also possible for the other.